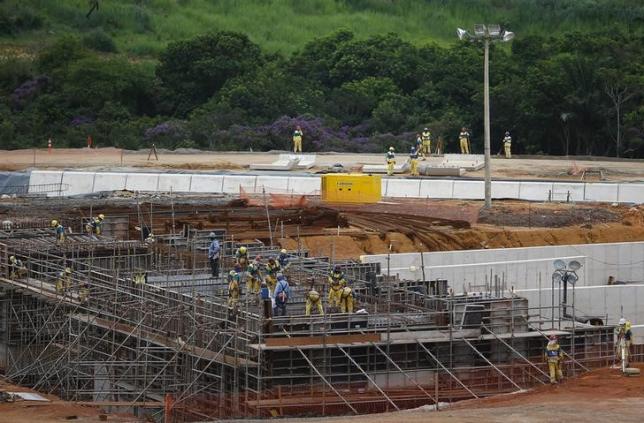 RIO DE JANEIRO - Work on the Deodoro Olympic Park in Brazil is on schedule and will not be affected by layoffs at the company building it, Rio de Janeiro Mayor Eduardo Paes said on Thursday. The mayor told journalists the 2016 Olympic host city had put up money for the venue while engineering firm Queiroz Galvão SA waits for a loan from state-run lender Caixa Econômica Federal. Queiroz Galvão is one of 29 companies being investigated in a price-fixing and kickback scandal at state-run oil company Petroleo Brasileiro SA (PETR4.SA) that is stalling infrastructure projects and slowing Brazil's economy. On Thursday, local media reported that Queiroz Galvão, which leads the consortium building the Olympic Park, had fired 70 workers and put more than 1,000 on alert because of difficulty obtaining the loan. The company declined to comment on the press reports but a spokesman said work at Deodoro was on schedule. The 800 million reais ($256 million) park has been a major headache for organizers of next year's Olympics. During a visit to Rio de Janeiro in February, the Olympic Organizing Committee flagged delays in building a cross-country course for equestrian sports. Deodoro will also host basketball, mountain biking and rugby competitions. - Reuters