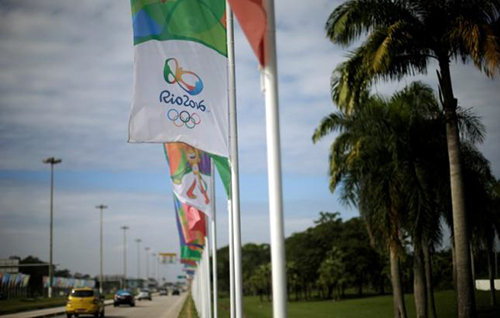 RIO DE JANEIRO – Brazil's government on Friday fired a private security firm hired to provide screeners for Olympic venues and replaced them with federal and state police, just one week from the opening of the 2016 Games in Rio de Janeiro. Justice Minister Alexandre Moraes said that members of the federal government's National Force, along with active and retired police from Rio and other states, will comprise the corps of 3,000 people screening fans and running metal detectors at Olympic venues. It was just a few weeks ago that the government contracted the relatively unknown security firm Artel to carry out that task. The company was expected to provide 3,400 guards. But Artel told the government in recent days it had only recruited 500 screeners. "The company will be fined for its incompetence and irresponsibility," Moraes said. "But the Games will not suffer any damage." Moraes has said that the main security concern is crime against visitors. But fears of potential terror attacks grew after Brazil last week arrested several people who allegedly swore allegiance to the Islamic State militant group and supposedly planned to carry out attacks. The change in venue screeners will not impact the 85,000 soldiers, police and other government security officers who will be patrolling Rio's streets in an effort to keep the peace during the Games, which run through Aug. 21. That is double the number of security agents on the ground in London at the 2012 Olympics. Brazil has more homicides than any other nation, according to annual United Nation reports on murders, and Rio has recently endured an increase in crime amid an ongoing recession, rising unemployment and shortfalls in public security budgets. But the city has consistently pulled off massive events such as Carnival, the 2014 World Cup final and one of the world's biggest New Year's Eve bashes with few security hiccups for visitors. Instead, most of the violence is focused in Rio's slums, where roughly 20 percent of the population lives and where a recent spike in deaths has been focused as drug gangs battle one another for turf and clash with police. The problem with the security contractor is similar to one that hit London Olympic organizers in 2012. Just two weeks before the Games started in London, the G4S security firm said it could not provide the 10,400 guards it was contracted to provide. That forced the British government to put an extra 3,500 troops on standby to fill the gap. –REUTERS