Over 1,100 protesters arrested in countrywide crackdown 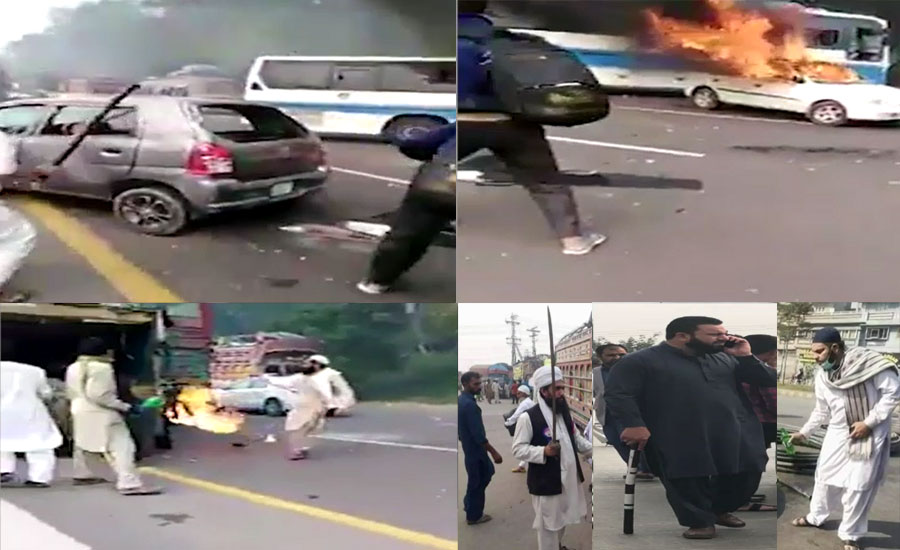 Over 1,100 protesters arrested in countrywide crackdown

ISLAMABAD (92 News) – Over 1,100 protesters have been arrested in a crackdown against miscreants and arresting those involved in damaging property and harassing citizens during countrywide protest against Supreme Court verdict acquitting Asia Bibi. Over 250 cases have been registered against the protesters across the country. As per details garnered, police has been registering cases against the culprits. In Islamabad, 120 suspects arrested and criminal proceedings underway I-9, Aabpara, Bara Koh, Sehzad Town and Koral at Police Stations. AN anti-terrorism court sent 16 protestors to jail on judicial remand. Orders have also been issued to imprison 19 rioters under the Maintenance of Public Order (MPO). In Rawalpindi 32 rioters were arrested, while in Karachi two suspects were taken into custody for damaging a factory located in Korangi. Meanwhile, the Federal Investigation Agency (FIA) has also initiated process of accumulating evidence against all those involved in pillage and wanton violence during the protest. Interior ministry has also dispatched a draft to FIA in this regard. In Faisalabad, 28 cases have been registered in which 70 accused nominated and over 700 were included as unidentified suspects. 26 accused arrested and sent on judicial remand, however; six arrested from Manawala. The police arrested 20 violent protestors from Gujrat and 10 from Safdarabad, while many people were taken into custody from Sharaqpur. The cases registered against more than 300 persons at Kot Ranjeet in Mureedka. The crackdown has also been launched against the rioters who damaged the public or state properties on the orders of Mandi Bahauddin DCO, as a result 100 were arrested. Moreover, more than 70 rioters have been taken into custody from Sheikhupura. As per police officials, the miscreants were traced through videos shot during the demonstrations. “In Sheikhupura, the rioters had not only damaged property but clashed and wounded 34 policemen,” police officials added. In the district of Gujrat, 21 cases have been registered and Syed Ali Mohsin confirmed that the 20 protestors nabbed while three were released on the bail. In Sharaqpur, the criminal proceedings also have been initiated against the rioters who damaged the state properties and many workers related from the religious parties also arrested and shifted to the unknown places. In Toba Tek Singh and Jehlum, the police official said that raids are being conducted to nab the rioters. A case has been registered against a former PML-N MPA and 270 others in Sargodha for vandalizing and damaging public properties. Minister of State for Interior Shehryar Afridi has also summoned a report today from the Federal Investigation Agency (FIA), National Database Registration Authority (NADRA) and Pakistan Telecommunication Authority (PTA) regarding the identities of the rioters. The Ministry of Interior set up a complaint cell, urging citizens to share pictures and videos of those involved in damaging state and private properties in the name of protests. They have been asked to share such pictures and videos on 03315480011 to help identify the rioters. Earlier on Sunday, the ministry released initial pictures of the miscreants involved in vandalising property and harming common citizens during the demonstrations, which ended on Friday after the government reached an agreement with the protesters. Police said 500 people, including Tehreek-e-Labbaik Pakistan (TLP) chief Khadim Hussain Rizvi and senior leader Afzal Qadri, have been booked in 11 cases. The suspects face charges of disrupting peace and blocking roads in Lahore.