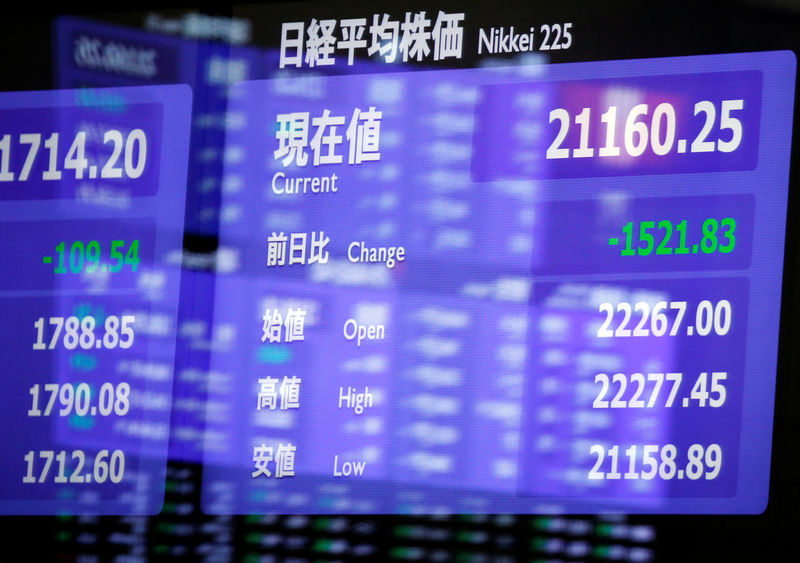 TOKYO (Reuters) - Asian shares wobbled on Friday after benchmark US Treasury yields surged to a fresh seven-year high and strong economic data fanned concerns about inflation and the risk of faster-than-expected interest rate rises.
MSCI’s broadest index of Asia-Pacific shares outside Japan fell 0.3 percent, while Japan’s Nikkei dropped 0.5 percent and Australian benchmark was up just 0.1 percent. “Rapidly rising Treasury yields are rocking equity markets around the globe, with high price-to-earnings tech stocks leading the decline,” said Yasuo Sakuma, chief investment officer at Libra Investments. The yield on the benchmark 10-year note hit a fresh seven-year high of 3.232 percent overnight following data released the previous day that was seen as increasing the odds a Friday payrolls report would also be stronger than expected. Wall Street stocks, in turn, have fallen broadly on Thursday, with the Dow suffering its first decline in six sessions and both the S&P 500 and Nasdaq seeing their worst day since June 25. The Dow Jones Industrial Average fell 0.75 percent, while the S&P 500 lost 0.82 percent and the Nasdaq Composite dropped 1.81 percent. The CBOE Global Markets volatility index, known as Wall Street’s “fear gauge”, jumped as high as 15.84 points, its highest since Aug. 15. The Japanese equivalent of VIX also rose, with the Nikkei volatility index surging as high as 19.07, its highest in seven weeks. Fed Chairman Jerome Powell said earlier this week the economy can expand for “quite some time,” which also helped the yield curve steepen to its highest in two months. Jeffrey Gundlach, chief executive of Doubleline Capital, told Reuters on Thursday that the 30-year US Treasury bond yield has broken above a multi-year base, which should lead to significantly higher yields for financial markets. “As I have been saying, two consecutive closes above 3.25 percent on the benchmark 30-year Treasury means that my statement in July 2016 that we were seeing the low - I said italicized, underlined and in boldface - is now, looking at the charts, thoroughly corroborated,” he said. On Thursday, the 30-year Treasury note closed at 3.35 percent, compared with 3.34 percent on Wednesday. The surge in Treasury yields has also prompted a rise in government bond yields across the globe, with a major exception being Italy, where borrowing costs dropped after the government said it would cut budget deficit targets from 2020. Japanese and euro zone bond yields rose sharply, tracking their US counterparts. The spread between junk bonds and long-end US Treasuries shrank to the narrowest since 2007 on Wednesday as government debt was sold off heavily, with analysts closely watching to see if that could signal a looming end to the credit cycle. The premium investors are paid, or the average spread, of US corporate “junk” bond yields over Treasury debt, fell to 3.16 percentage points on Wednesday, the tightest since just before the financial crisis, according to the ICE BofAML US High Yield Master II Option-Adjusted Spread The US dollar was steady but lingered near recent highs against the euro and the yen as investors assessed US economic data and Powell’s remarks. The dollar index was flat at 95.786, with the euro softening 0.1 percent to $1.1508. The Japanese yen was little changed versus the greenback at 113.89 per dollar. Investors are expected to scour the US government’s September payroll report scheduled for release on Friday and look closely for signs of wage growth, especially in light of anecdotal indications of rising wages. “Although we are likely to see strong payroll figures later today, we could see some corrections in markets ahead of a long weekend in the United States and Japan,” said Naoki Iwami, fixed income chief investment officer at Whiz Partners. Oil prices rose on Friday, two days after hitting four-year highs, lifted by looming US sanctions against Iran’s crude exports that are set to start next month. [O/R] US crude oil futures rose 0.7 percent to $74.84 a barrel and Brent crude futures gained 0.5 percent to $84.98 a barrel.