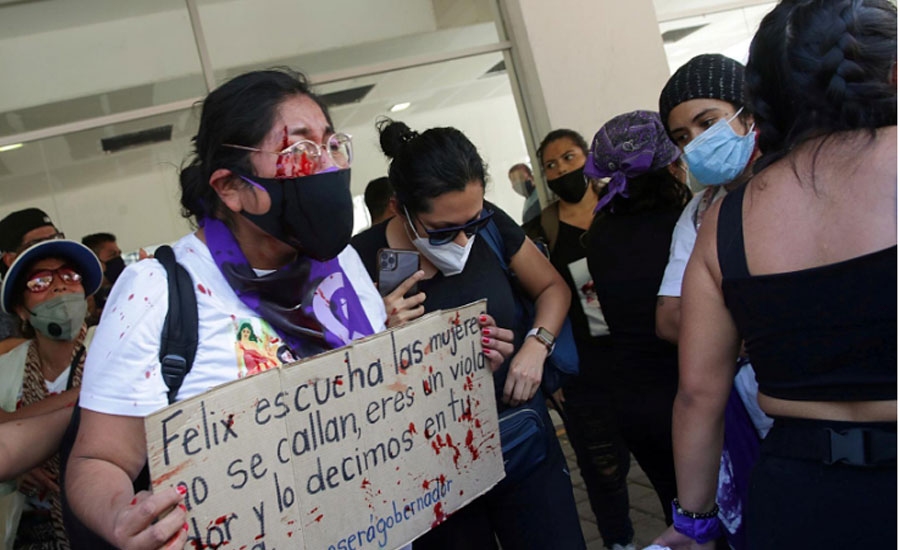 MEXICO CITY (Reuters) - Scuffles broke out between rival protesters in the southern Mexican city of Iguala on Wednesday amid growing anger over President Andres Manuel Lopez Obrador’s backing of a gubernatorial candidate accused of rape.

Video shared on social media showed one woman hitting another woman with a megaphone, bloodying her face, following a joint event between Lopez Obrador and Argentina’s president, Alberto Fernandez.

The injured protester, Yolitzin Jaimes, was demonstrating against Felix Salgado, a gubernatorial candidate for the southern state of Guerrero and a member of Lopez Obrador’s ruling MORENA party.

“We came here to protest peacefully, to ask the president to break the patriarchal pact,” Jaimes told Reuters by telephone.

Calls have been growing in recent weeks for the president to drop his support for Salgado over the rape allegation. Earlier this month, a group of female MORENA lawmakers, party members and supporters published a letter urging the party leadership to reconsider Salgado’s candidacy.

The Guerrero vote is part of a raft of elections taking place in June that will determine whether MORENA and its allies can retain control of the lower house of Congress.