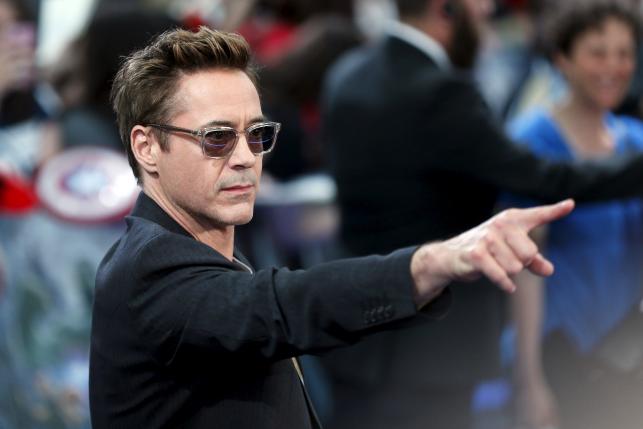 LOS ANGELES - "Iron Man" star Robert Downey Jr. was named the world's top-earning actor on Tuesday by Forbes, taking first place on a list that featured leading men from Bollywood as well as Hollywood for the first time. Downey, 50, earned an estimated $80 million between June 2014 and June 2015, spurred by the success of this year's superhero ensemble "Avengers: Age of Ultron," which grossed more than $1.3 billion worldwide. Second-place honors went to veteran Chinese actor and martial arts star Jackie Chan, 61, who Forbes said had earned $50 million in the past year from Hollywood and China co-productions such as "Dragon Blade" as well as merchandise. Chan came in ahead of Hollywood stars Vin Diesel, who grabbed third place with $47 million mainly due to his stake in the "Fast and Furious" franchise, as well as Bradley Cooper, Adam Sandler and Tom Cruise. Sandler, 48, whose most recent big budget film "Pixels" performed poorly in the global box office, still earned $41 million over the past year, in part due to his production deals with Sony studios and Netflix. Bollywood actors Amitabh Bachchan, Salman Khan and Akshay Kumar, all staples of Indian cinema, also featured in the top 10, with 72-year-old Bachchan and 49-year-old Khan tying at No. 7 with $33.5 million each. Kumar, 47, came in at No. 9 with $32.5 million. Forbes collates its earnings lists using figures from sources such as Nielsen, Box Office Mojo and IMDB, and calculates earnings by deducting estimated taxes and management fees. It will publish a list on the world's highest-paid actresses at a later date. - REUTERS