Robot chef serves up the future of home cooking 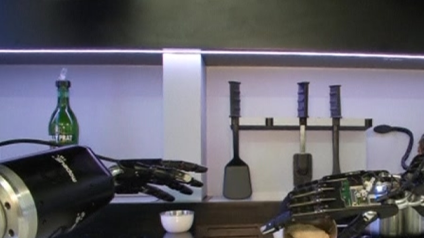 Robot chef serves up the future of home cooking

LONDON - A robotic chef that can whip up professional quality meals in a matter of minutes has been developed by engineers in the UK, who call it the world's first Automated Kitchen. The system was created by UK-based Moley Robotics, which aims to develop a consumer version with an affordable price tag within two years, supported by an iTunes-style library of recipes that can downloaded for the robo-chef to cook in the home. It features two fully articulated hands, made by the Shadow Robot Company, whose products are used in the nuclear industry and by NASA. The dextrous hands are able to faithfully reproduce the movements of a human hand, cooking up Michelin-starred delicacies with all the skill and flair of a master chef. Key to the robot's kitchen prowess is the way its movements have been 3D-mapped to those of professional chef Tim Anderson. To transfer his knowledge into the machine, Anderson was recorded in a special studio cooking while wearing motion-capture gloves. Every motion, no matter how subtle, was captured by the motion-capture technology; from the way Anderson stirred the liquids to the way he controlled the temperature of the hob. His actions were then translated into smooth digital movement using bespoke algorithms developed by Moley in collaboration with Shadow and the Universities of Stamford (USA) and SSSUP Pisa (Italy). For the current demonstration, the team has mapped the exact movements Anderson uses to make a crab bisque. "If it can mimic my hands and any chef's hands, then with some work on it there's no reason why it can't do just about anything; kneading bread, making sushi - all these things that are very hands-on, for lack of a better term. The scope of what it can do is almost endless," said Anderson. He added that, instead of putting their human counterparts out of business, the robot chef could be an important tool for getting recipes prepared in people's homes they way they intended them to be. "I think that this is going to be an incredible tool for chefs, especially chefs who want to have a wide audience for their food. You can write a cook book, you can get recipes out there in different ways, you can make ready meals and meal kits, things like that. But this is a really good way of getting food into people's homes in the way that you would want them to be prepared. And it takes some of the guesswork out of things like people following recipes." Moley Robotics is now looking to develop a robot chef that can be easily integrated into people's homes. Founder and inventor of the robot chef, Mark Oleynik, said it's the human-like hands that make the robot chef unique, and a crucial factor in establishing it as a product that people want in their homes. "The best way to make universal things; it's make it the way people do it. Because people are universal things; everything they create, they create by hand. So this was a key point of transferring their human intelligence, and the product based on this," he said. If the hands can be taught to cook, according to the designers, there's no reason they couldn't play the piano, learn carpentry and more. But the company's primary aim is to produce a technology that addresses basic human needs and improves day-to-day quality of life. "If you can make the right model, the robot does not make mistakes. So it's fun for humans to make a creative process and keep the boring process for the machine," said Oleynik. - Reuters