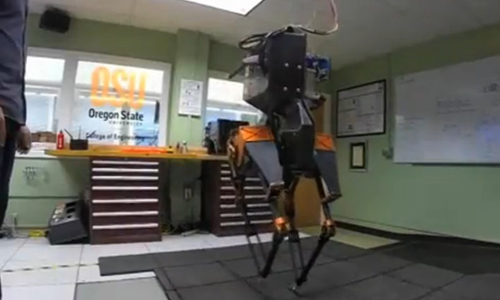 OREGON - It's another day of abuse for this poor robot named Atrias. If not being kicked around, Atrias spends hours being pummeled by balls. But, remarkably, through the abuse, the robot stays on its feet. Unlike most bipedal robots which are designed to move like humans, engineers from the Dynamic Robotics Laboratory at Oregon State University modeled Atrias on a bird, creating what is basically a robotic ostrich that conserves energy while maximizing agility and balance. Atrias is fitted with two constantly moving pogo stick-like legs made of carbon fiber. Fiberglass springs store the mechanical energy produced while the robot makes unsuccessful attempts to avoid the punishment it receives from its creators. The researchers say that with a few more tweaks, the robots bird-like design will allow it to become the fastest two-legged robot ever built. Atrias is funded by the US Defense Department's research arm, DAPRA, who hope the robot will one day be able to work in hazard zones too dangerous for humans. The robot's unique legs could also lead to more agile prosthetics in the future. But until that day comes - Atrias will just have to keep on taking the abuse -- all in the name of science. - Reuters