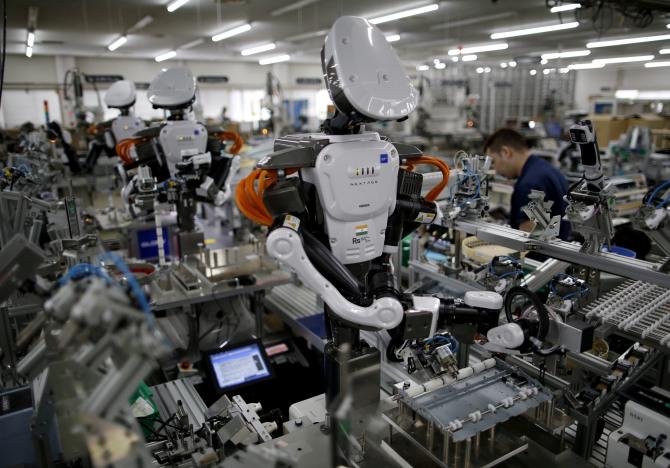 ZURICH (Reuters) - Robots will make robots at a new ABB factory in China, which the Swiss engineering group said on Saturday it plans to build for $150 million in Shanghai as it defends its place as the country’s largest maker of industrial robots. The factory, located near ABB’s China robotics campus, is due to be operating by the end of 2020 and will produce robots for China as well as for export elsewhere in Asia. China is ABB’s No. 2 market after the United States. “Shanghai has become a vital center for advanced technology leadership – for ABB and the world,” ABB Chief Executive Ulrich Spiesshofer said in a statement announcing the project. With the expansion, ABB is banking on Chinese robots sales defying concerns over trade tensions with the United States that some fear could dent demand for electronics, auto parts and other items that require automated manufacturing and robots. China is expanding its robot workforce, as wages for human workers there rise and the country seeks to compete with lower-cost countries via greater automation. In 2017, one of every three robots sold in the world went to China, which purchased nearly 138,000 units, ABB said. ABB’s new 75,000-square-foot factory will use software meant to allow people and robots to work safely in close proximity, the company said, adding its YuMi robots — designed to work side-by-side with people — will also be deployed on many of the small parts assembly tasks needed to manufacture an ABB robot. Rival Kuka, taken over in 2016 by China’s Midea two years ago, has also been expanding in the country, including by building a robot park in Shunde near Hong Kong. ABB, whose industrial robots are used, among other things, to build automobiles as well as to assemble electronic devices, will build robots for numerous industries at the Shanghai factory, a spokesman said. It did not give a new employee count for the factory, but said it will boost robotics employment that now sits at more than 2,000 ABB workers in China.