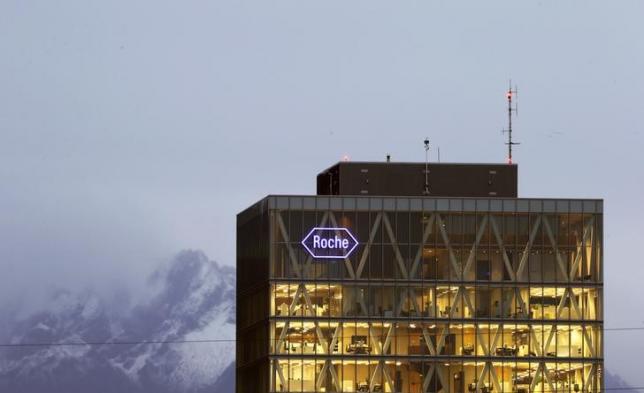 ZURICH - Roche 's new immune-system boosting cancer drug has given positive results in tests on patients suffering from some lung and bladder cancers, according to data released on Sunday at the European Cancer Congress in Vienna that the company hopes will help it win quick regulatory approval. In its Phase II trial targeting advanced or metastatic bladder cancer, Roche said its atezolizumab immunotherapy drug shrank tumors in 27 percent of people who expressed medium and high levels of PD-L1, a protein that appears to help cancers evade the immune system. In two separate Phase II trials targeting advanced non-small cell lung cancer, Roche said patients getting atezolizumab lived 7.7 months longer than those who got chemotherapy. The drug also shrank tumors in up to 27 percent of lung cancer sufferers whose disease had progressed with other treatments and who expressed the highest PD-L1 levels, the Swiss company said. Roche, the largest maker of cancer drugs, is banking on atezolizumab as its next blockbuster to keep pace with rivals including Merck & Co. and Bristol-Myers Squibb in cancer immunotherapy development. It hopes the drug will be on the market by late-2016 and said data from these latest studies will help. "We plan to submit these results to global health authorities to bring this potential new option to people as soon as possible," said Sandra Hornung, Roche's chief medical officer, in a statement. Roche won 'breakthrough therapy status' for atezolizumab in February from the U.S. Food and Drug Administration and is now calling it the "first new therapy for bladder cancer in 30 years." "Durable responses are not something you currently see in bladder cancer with chemotherapy," said Thomas Buechele, Roche's head of global medical affairs in hematology and oncology, in an interview. Analysts said Roche is under the gun to win the blessing of regulators, to not fall further behind rivals. "Merck filed Keytruda in lung cancer in April and Bristol-Myers Squibb has filed Opdivo," said Michael Leuchten of Barclays, in a note to investors. "As such, Roche needs to follow suit as soon as possible." Adverse events associated with atezolizumab, including fatigue, itching, rash and joint pain, were consistent with previous studies, Roche said of its trials. The monoclonal antibody is designed to interfere with the protein called programmed death-ligand 1, or PD-L1, that normally plays a role in preventing autoimmunity but can be produced by some tumors, enabling them to evade the immune system. Roche aims to get atezolizumab to prevent PD-L1 from binding to receptors on the surface of cancer-fighting T cells, helping activate them to fight the tumor. "When we inhibit PD-L1 the immune response goes up," Daniel Chen, Roche's cancer immunotherapy franchise head, said in September. The emergence of these so-called "checkpoint inhibitors," which companies such as AstraZeneca and Pfizer also have in their own trials, is being followed by oncologists seeking to keep patients alive longer with fewer side effects. "It is to be expected that atezolizumab, like other PD-1 and PD-L1 antibodies, will substantially change treatment strategies of patients," Dr. Martin Reck, chief oncology physician at Germany's Grosshansdorf Hospital, said in a statement. -Reuters