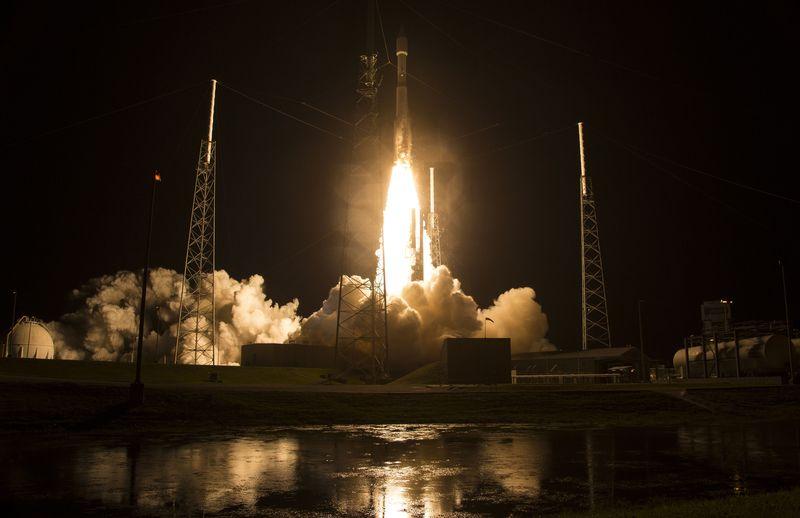 CAPE CANAVERAL - An Atlas 5 rocket blasted off from Florida on Thursday with a quartet of NASA science satellites designed to map bursts of energy and charged particles triggered by criss-crossing magnetic fields around Earth. The 20-story-tall rocket, built and launched by United Launch Alliance, a partnership of Lockheed Martin and Boeing, lifted off from Cape Canaveral Air Force Station at 10:44 p.m. EDT. Perched atop the rocket were four identical satellites designed to fly in a pyramid formation high around Earth. The probes were successfully delivered into their initial orbits less than two hours after launch. Each satellite is equipped with 25 sensors to record in split-second detail what happens when the planet's magnetic field lines break apart and reconnect. Data from the four probes will be combined to produce three-dimensional maps of the process. Magnetic reconnection, as the phenomenon is known, is commonplace throughout the universe, but poorly understood. Magnetic fields are generated by planets, stars, galaxies, black holes and other celestial objects. When field lines snap apart and reconnect, charged particles are sent soaring into space at nearly the speed of light, roughly 186,000 miles per second (300,000 km per second). On the sun, magnetic reconnection unleashes solar flares, each as powerful as 1 million atomic bombs. Such solar activity can trigger magnetic storms and aurora displays on Earth. NASA is spending about $1.1 billion on the project, known as Magnetospheric Multiscale, or MMS, in an effort to understand how the energy is generated and released. The satellites will fly directly into reconnection zones 44,000 to 95,000 miles (70,811 to 152,888 km) above Earth and map what happens when magnetic field lines realign. "The MMS mission will conduct a definitive experiment in space that will finally allow us to understand how magnetic reconnection works," lead researcher Jim Burch from the Southwest Research Institute in San Antonio, Texas, told reporters at a pre-launch press conference. The research may have some practical spinoffs as well. Efforts to harness nuclear fusion in laboratories have been stymied by magnetic reconnection, which causes temperatures to drop in the fusion chambers. It also may help forecasters predict dangerous solar storms, which can knock out power grids on Earth and disrupt radio, GPS and satellite signals. The mission is designed to last two years. - Reuters