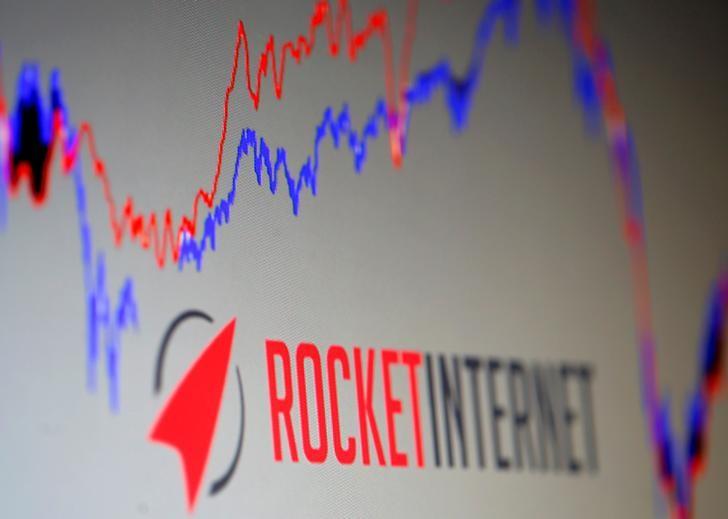 BERLIN - German e-commerce investor Rocket Internet reported progress in cutting losses at its main start-ups with three set to generate profits by the end of 2017, while its shares were lifted by a plan to buy back convertible bonds. Rocket Internet shares, which have been hit by concerns about mounting losses and cuts to the valuation of some of the company's leading start-ups, were up 10.4 percent by 0920 GMT, but were still down a quarter on the year. Finance chief Peter Kimpel said Rocket was still working towards a goal of a public listing for one of its 10 main start-ups in food delivery, fashion and home furnishings in the coming months, but said timing would depend on market conditions. Rocket was forced to pull the listing of its HelloFresh recipe ingredients business last year, but markets have become more receptive recently to technology flotations, with rivals such as Takeaway.com and Blue Apron preparing to go public. Along with HelloFresh, Rocket's other most likely candidates for a listing are seen as food site Delivery Hero and emerging market ecommerce firm Global Fashion Group (GFG), which reported last week it had managed to stem its losses. Rocket did not publish any figures on Thursday for Delivery Hero, the second-biggest in its portfolio, but Kimpel said it would give more information in due course. He also declined to comment on a recent funding round for the business. "They are doing what they are supposed to be doing. Bringing companies to profit," said Berenberg analyst Sarah Simon, who has a "buy" rating on the stock. Kimpel said a decision to spend up to an additional 85 million euros on convertible buybacks by Sept. 30, 2017 was taken because Rocket now felt it had "excess capital". Rocket, which listed on the Frankfurt stock exchange in 2014, saw its shares tumble in July 2015 when it said it would sell 550 million euros worth of convertible bonds. In February, it said it would buy back up to 150 million euros of them. Rocket reiterated a target set a year ago to turn three of its 10 main start-ups profitable by the end of 2017, pointing to smaller losses at home furnishings site Westwing and at GFG. Aggregate first half revenue rose 32 percent to 1.043 billion euros ($1.17 billion), compared to the 34 percent gain achieved in the first quarter as the rapid pace of expansion at HelloFresh, Rocket's biggest investment, slowed. Neil Campling, tech analyst at Northern Trust Capital Markets, said that was a major concern: "It would appear that the focus on improving profitability (or rather, less losses) is dragging on growth." Earlier this month, Rocket reported a first-half consolidated loss of 617 million euros, mainly due to impairments on its GFG stake. On Thursday, it also said that figure included writedowns on its stake in Latin American ecommerce site Linio. Rocket said it had decided against participating in a funding round for Linio involving Swedish investor Kinnevik , which cut the valuation of the business to 150 million euros from a previous 370 million. -Reuters