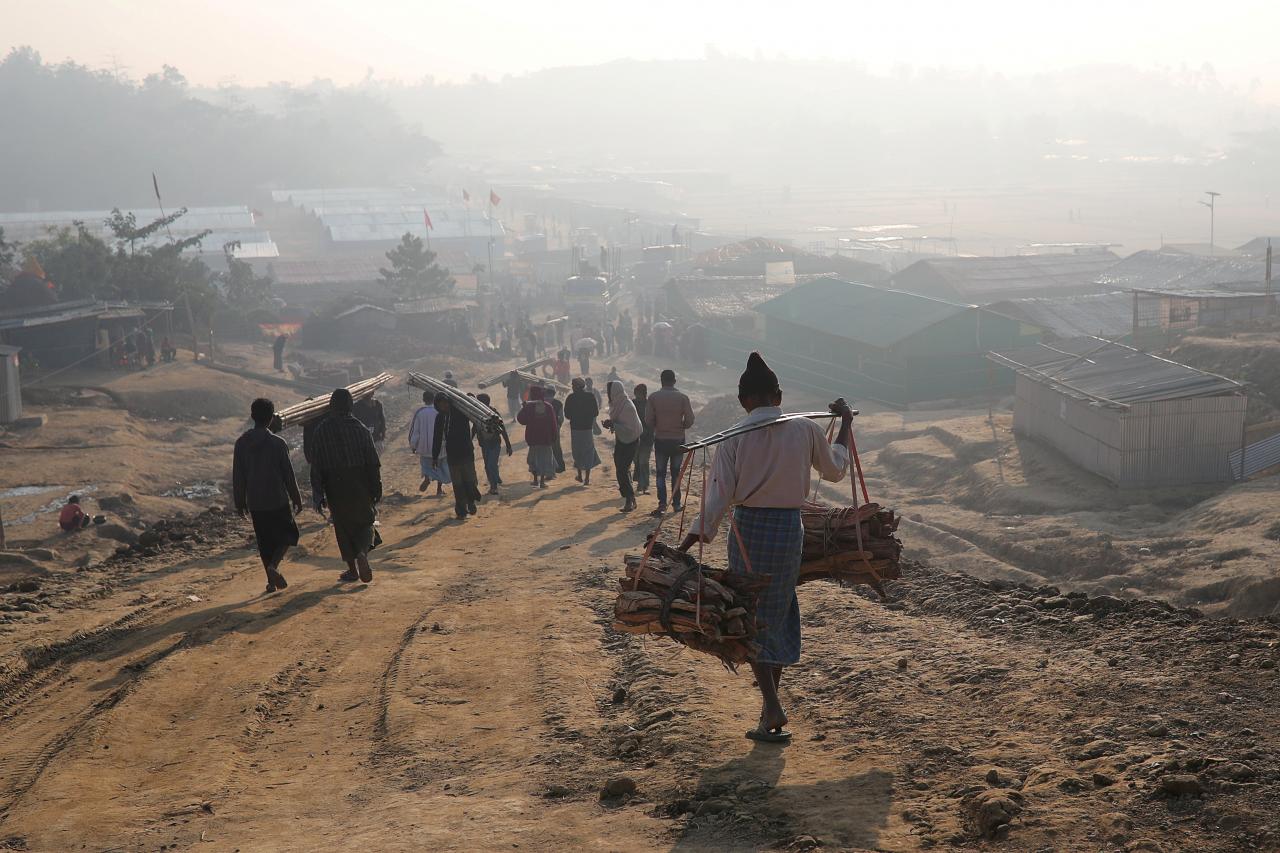 COX’S BAZAR, Bangladesh/YANGON (Reuters) - Dozens of Rohingya Muslim families on a list of refugees set to be repatriated to Myanmar later this week have fled from camps in Bangladesh where they were living, a Rohingya leader said on Monday, even as Myanmar prepares to begin receiving them. “Most of the people on the list have fled to avoid being repatriated,” said Abdus Salam, a Rohingya leader at the Jamtoli camp, some 40 km (25 miles) southeast of Cox’s Bazar in Bangladesh, adding most have fled to other neighboring camps to avoid being detected and forced to return against their will. Bangladesh and Myanmar agreed in late October to begin repatriation of hundreds of thousands of Rohingya refugees who fled Myanmar to escape an army crackdown, even though the United Nations’ refugee agency and aid groups say doubts persist about their safety and conditions in Myanmar should they return. The repatriation of the first batch of 2,000 refugees is set to officially begin on Nov. 15 and officials in Myanmar said on Sunday they were ready to begin receiving refugees this week. “It depends on the other country, whether this will actually happen or not,” Win Myat Aye, Myanmar’s Minister for Social Welfare and Resettlement, told a news conference, referring to Bangladesh. “But we must be ready from our side. We have done that.” Last week, more than 20 individuals on the list of potential returnees submitted by Bangladesh told Reuters they would refuse to return to Myanmar’s western Rakhine state, from where they fled, saying that they were terrified. Bangladesh has said it would not force anyone to return and has asked the United Nations High Commissioner for Refugees (UNHCR) to verify whether those shortlisted are willing to go back. Firas Al-Khateeb, a UNHCR representative in Bangladesh, told Reuters on Sunday that this effort had not yet begun.

“People are so afraid of being identified, they are avoiding Friday prayers at the mosque,” said one refugee, who has fled with his family from Jamtoli to the large Kutupalong camp to evade repatriation. The United Nations has said conditions are not yet safe for the refugees to go back, in part because Myanmar Buddhists have been protesting against the return of Rohingya. The UNHCR said late on Sunday that refugees should be allowed to go and see the conditions in Myanmar before they decide whether to return. Abul Kalam, Bangladesh Relief and Repatriation Commissioner, said he was hopeful the process could begin on Thursday. “The return will be voluntary. Nobody will be forced to go back,” he told Reuters. More than 700,000 Rohingya Muslims fled the sweeping army crackdown in Myanmar last year. They say soldiers and local Buddhists massacred families, burned hundreds of villages, and carried out gang rapes. U.N-mandated investigators have accused the army of “genocidal intent” and ethnic cleansing. Myanmar denies almost all of the allegations, saying security forces were battling terrorists. Attacks by Rohingya insurgents calling themselves the Arakan Rohingya Salvation Army preceded the crackdown.

The UNHCR called for Myanmar to allow Rohingya refugees to visit their places of origin or resettlement sites to make their own “independent assessment of whether they feel they can return there in safety and dignity”. “Myanmar authorities should allow these refugees to undertake such go-and-see visits without prejudice to their right to return at a later date,” the UNHCR said in a statement late on Sunday. Meanwhile, Myanmar minister Win Myat Aye said preparations had been made for 2,251 people to be transported to two transit centers by boat on Thursday, while a second group of 2,095 could follow later by road. Once processed, they would be sent to another center where they would be housed, fed, and asked to build homes via cash-for-work schemes. Returnees would only be allowed to travel within Maungdaw township, one of the three areas they fled, and only if they accepted National Verification Cards, an identity document most Rohingya reject because they say it brands them as foreigners. Many Rohingya, who have been left stateless, oppose going back without guarantees of citizenship and freedom of movement.