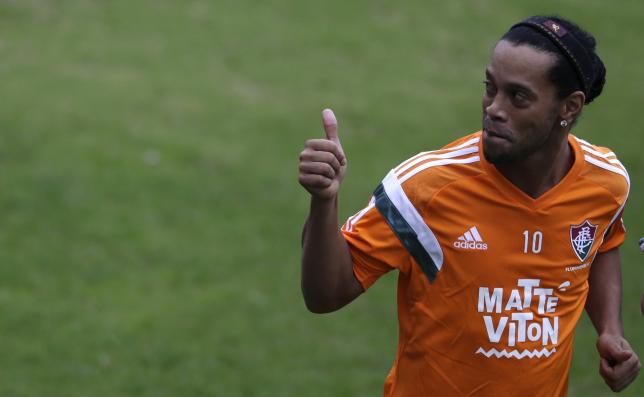 SAO PAULO - Ronaldinho Gaucho made a triumphant return to Brazilian soccer on Saturday when he set up the goal that gave Fluminense a 1-0 win over Gremio at the Maracana stadium. The former Barcelona forward was a shadow of his former self but his flighted pass into the box after 76 minutes was knocked down for Marcos Junior, who dribbled around the keeper and slotted the ball into the net. "It was important to start with a win," Ronaldinho said in a televised interview. "I am delighted, now I just need to keep working away." The 35-year old former World Player of the Year had not played a competitive match since leaving Mexican side Queretaro in June and he was expected to appear for just 45 minutes. However, although he missed many of his attempted passes, he stayed on the field for the whole game, to the delight of the 33,000-strong crowd. "I didn't know if I would manage the whole 90 minutes but I am very happy," he said. The win lifts Fluminense into third place in the league table. - Reuters