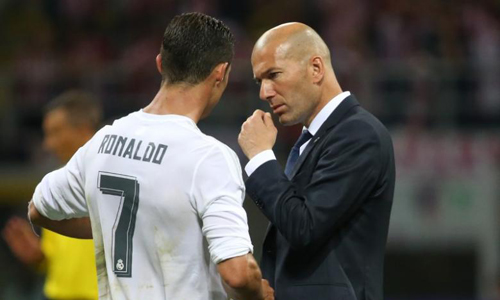 MADRID- Cristiano Ronaldo is angry with his recent record in front of goal but not anxious about when he will find the net next, Real Madrid coach Zinedine Zidane said on Friday. With four strikes in nine appearances in all competitions, Real's all-time top scorer is in the midst of his worst start to a season since joining the Spanish champions from Manchester United in 2009. Ronaldo failed to score in Real's 5-1 drubbing of Legia Warsaw and Sunday's 2-1 success over Athletic Bilbao, substitute Alvaro Morata hitting the winner to take Real top of La Liga. "I don't think he's anxious but he is perhaps angry, he wants to score goals and that's normal," Zidane told a news conference ahead of Real's trip to Alaves. Ronaldo is the Ballon d'Or favourite after winning the Champions League with Real and European Championship with Portugal. He also scored over 50 goals for Real for a record sixth consecutive season. "He is unique because of what he has done and what he continues to do. He has set the bar so high that when he doesn't score people on the outside are surprised," said Zidane. "He has to live with that, that's what it's like for phenomenal players like him." Alaves are 13th in the standings on 10 points, 11 behind Zidane's side. The Frenchman, however, is wary of the threat posed by the Basque side, who beat champions Barcelona 2-1 at the start of the campaign, as his team look to build on a three-game winning streak in La Liga and the league and Champions League. "I expect a very difficult game. They haven't lost at home yet and are doing so well this season," added Zidane. -Reuters