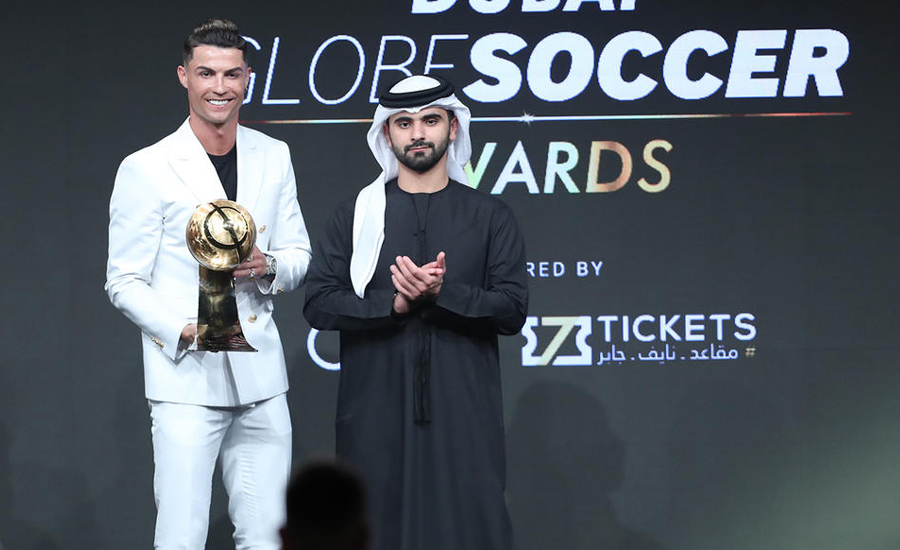 DUBAI (Web Desk) – Cristiano Ronaldo was ­yesterday crowned men’s player of the year at the Dubai Globe Soccer Awards, winning the honour for a sixth time. The Juventus forward, 34, scooped Best Men’s Player of the Year at a glitzy ceremony at the Madinat Jumeirah, with England’s Lucy Bronze winning the inaugural award for best woman. Meanwhile, Liverpool picked up a trio of victories, with Jurgen Klopp voted best coach, Alisson Becker best goalkeeper, and the ­European champions named best club. Ronaldo retained the trophy he won earlier this year, on the back of a fine year with both Juventus and the Portugal national team. Having moved from Real Madrid the previous summer, he scored 21 goals in Serie A to fire the Turin club to an eighth successive Scudetto. He continued also his prolific strike rate for Portugal, scoring a hat-trick in the semi-final of the inaugural Uefa Nations League as his team went on to win the title. Last month, his goal against Luxembourg lifted his international tally to 99 goals and in the process helped 2016 champions Portugal qualify for this summer’s Euros. “I have to thank my family, my girlfriend, my boy there, Cristiano, my three kids who are waiting for me in the hotel, my friends, my teammates of Juventus and the national team, my agent, all the people here tonight who support this gala,” Ronaldo said. “I have to say thank you to the Arabic community, which is always great with me. I have to thank Dubai as well – it’s a marvellous place to be, I’m coming every year and I love this place. “And finally to thank [everyone] who voted for me. It’s a great honour to be here and receive this amazing award. I hope to be here next year to receive this award, of course. Thanks to everyone, and a happy New Year.” In the woman’s category, Bronze took the trophy following a stellar season with Lyon in which she played an integral role in the club’s march to the French Championship, the French Cup, the Trophee des Championnes and the Uefa Women’s Champions League. The defender, voted the Uefa Women’s player of the year, also starred as England finished fourth at this summer’s Fifa Women’s World Cup. Bronze landed the Silver Ball in France. Of the night’s other winners – 17 awards in all were handed out – Klopp added to his Fifa Best award in September in recognition of Liverpool’s international, European and domestic dominance. After defeating Tottenham Hotspur in the Champions League final in June, the Merseyside club top the Premier League at the halfway stage. Last week, they clinched the Fifa Club World Cup title for the first time. Brazilian Alisson lifted the goalkeeper award for the second successive year. Elsewhere, Ryan Giggs, the former Manchester United midfielder and current Wales manager, and Juventus midfielder Miralem Pjanic were each given the Player Career Award. Atletico Madrid and Portugal striker Joao Felix was named Best Revelation Player, which honours players aged 21 and under. There were Arab winners on the night, too, with Al Hilal voted best Arab club for their recent Asian Champions League success and Abderrazak Hamdallah named best Arab player. The Morocco striker top-scored in last season’s Saudi Pro League as Al Nassr sealed the title.