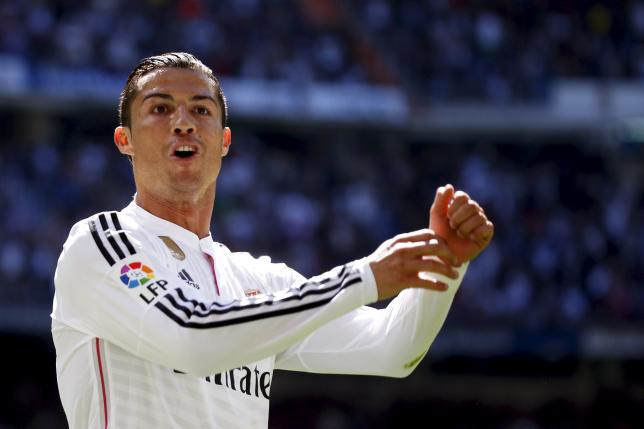 MADRID (Reuters) - Cristiano Ronaldo struck the quickest hat-trick of his career on his way to netting five goals in Real Madrid's 9-1 drubbing of second-from-bottom Granada on Sunday which took Real to within a point of La Liga leaders Barcelona. Portugal forward Ronaldo struck three times in eight minutes after Gareth Bale had fired Real ahead in the 25th minute on a festive, sun-drenched afternoon at the Bernabeu. Ronaldo has scored three or more goals 24 times in La Liga, equalling the record set this season by his great rival, Barcelona forward Lionel Messi. World Player of the Year Ronaldo has 31 career hat-tricks overall but Sunday's effort was only the second time he has scored one in the first half. After failing to find the net in his previous nine outings, Bale netted his fifth in his last four appearances for club and country when he pounced on a defensive error, rounded goalkeeper Oier Olazabal and slotted the ball into the empty net. Ronaldo clipped home his first of the game five minutes later, added a second after more poor defending in the 36th minute and a third in the 38th when Oier could only palm his fierce shot into the net. 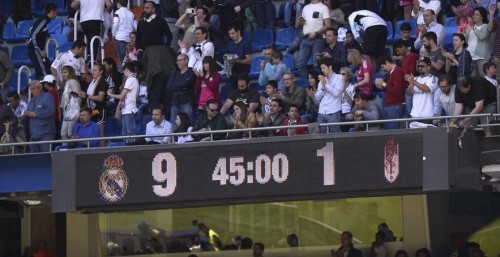 Karim Benzema made it 5-0 at a corner seven minutes into the second half, Ronaldo nodded his fourth two minutes later and Benzema grabbed his second a further two minutes after that as Real put a woeful Granada to the sword. Robert Ibanez pulled a goal back for the visitors in the 74th minute before Granada defender Diego Mainz put the ball into his own net seven minutes from time and Ronaldo nodded his fifth in the final minute. Ronaldo's five goals, the first time he has achieved the feat, took his tally in La Liga this season to 36, four ahead of Messi, who will have a chance to reduce the deficit when Barca play at Celta Vigo later on Sunday. The crushing victory for second-placed Real was just the tonic they needed after a run of three defeats in four games in all competitions, including a 2-1 reverse at Barca in the 'Clasico' on March 22. Barca have 68 points from 28 matches, with Real on 67 from 29. Champions Atletico Madrid are third on 62 points after they won 2-0 at bottom side Cordoba on Saturday. Valencia, on 60 points in fourth, can climb back above Atletico with a win at home to sixth-placed Villarreal later on Sunday.