Ronaldo reaches 100 goals for Juventus in vital win at Sassuolo 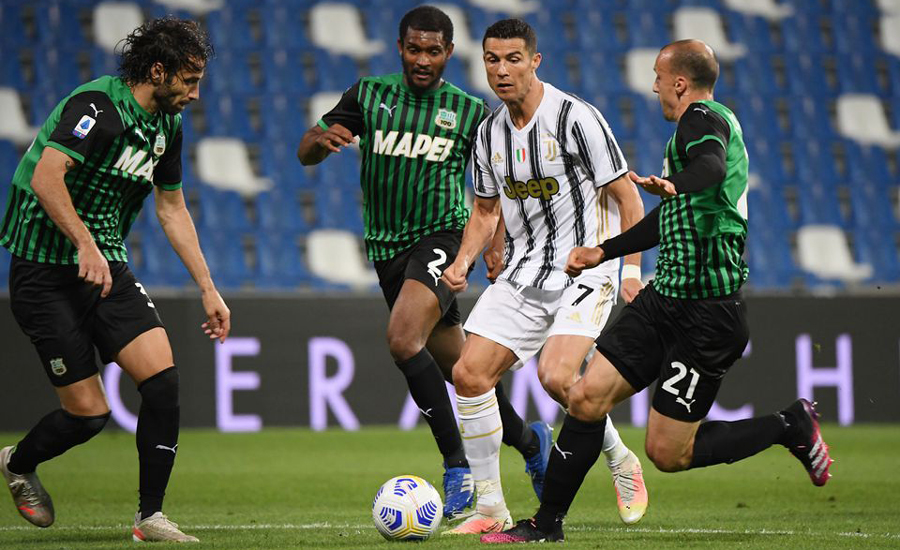 Ronaldo reaches 100 goals for Juventus in vital win at Sassuolo

REGGIO EMILIA, Italy (Reuters) – Cristiano Ronaldo's 100th goal for Juventus in all competitions helped keep alive his side's hopes of a top-four Serie A finish after a 3-1 win at an impressive Sassuolo on Wednesday.

The result was not easy to come by for Juve, with returning goalkeeper Gianluigi Buffon saving an early penalty, but goals from Adrien Rabiot, Ronaldo and Paulo Dybala meant they stayed fifth, two points off the Champions League qualification places.

Buffon, who announced this week that he is leaving the club at the end of the season, replaced Wojciech Szczesny in goal and immediately showed he has lost none of his ability as he brilliantly kept out Domenico Berardi's spot-kick.

The chances kept coming for the home side, and their profligacy proved costly as Rabiot drilled home the opener in the 28th minute, before Ronaldo reached another milestone just before the break with a cool finish from the edge of the area.

Sassuolo continued to do everything but score, until Giacomo Raspadori finally beat Buffon just before the hour mark.

But Dybala also reached a century of Juve goals, with a fine dinked finish, to ensure they kept pace with their top-four rivals Atalanta, AC Milan and Napoli, who all won in the latest round of matches, with two games to play.

Elsewhere on a busy night in Serie A, AC Milan thrashed Torino 7-0 to stay third and Atalanta cruised to a 2-0 win over Benevento, who remain deep in the relegation mire, to remain second.

Spezia earned a vital point in a 2-2 draw at Sampdoria to move four points clear of Benevento in 18th, while Cagliari's fine end-of-season form continued as they held Fiorentina to a 0-0 stalemate to move five points clear of the drop zone.

Lazio left it very late to get the better of relegated Parma, with Ciro Immobile's 95th-minute winner keeping them within touching distance of the top four on 67 points. Simone Inzaghi's side, however, have a game in hand on the rest.

But for Juve, with the pressure mounting on coach Andrea Pirlo after a meek surrender in a 3-0 loss to Milan at the weekend, it was imperative they did not drop more points.

"It was important to win tonight, we were so poor in the match with Milan," Rabiot told DAZN. "We wanted to do more, we suffered but the attitude was the right one."

"We are all angry, Juve must do better. We must try to win the last two games and see what happens."