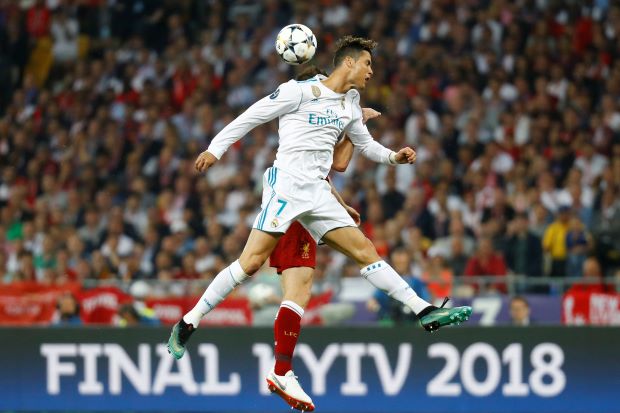 KIEV (Reuters) – Cristiano Ronaldo said he regretted taking the attention away from Real Madrid’s third consecutive Champions League crown after hinting the 3-1 final victory over Liverpool was his last game but reiterated that he is not happy with the club. The Portugal forward had told television network beIN Sports after the historic win in Kiev “in the next few days I’ll give an answer to the fans who have always been by my side. It was beautiful to be at Real Madrid.” Spanish newspaper Marca reported that Real’s players, especially captain Sergio Ramos, admonished the Portuguese for his sensational comments on the pitch of the NSC Olympic Stadium while his team mates celebrated. “I spoke when I shouldn’t have done but something is going to happen. It wasn’t the right time, but I was honest,” Ronaldo told reporters before boarding the Real bus. “In a week I’ll say something because the fans have always supported me and are in my heart. I don’t speak much, but when I speak, I speak,” he added. “Obviously I have something to say, but it wasn’t the right time, although I don’t regret it, because I was honest. I’ve kept putting up with this but then I couldn’t control myself.” Ronaldo caused a stir last year a few days after Real beat Juventus 4-1 in the final when Portuguese newspaper A Bola reported that the forward wanted to leave Madrid as he was not happy with how he had been treated by the Spanish club. Ronaldo’s desire for a new contract was believed to be behind last year’s stories and he has still not signed a new deal at Real. The 33-year-old, who became the first player in the Champions League era to win the trophy five times, including once with Manchester United, did not give a clear answer when asked what his grievances were. “This has been coming for a long time. Money is not the problem. I’ve won five Champions Leagues, five Ballon d’Ors. I was already in history but now even more,” he said. “I’m not bothered because I know what I give to this club. I don’t want to erase this unique moment with my team mates who are real champions.” Real coach Zinedine Zidane could not give an answer when asked about the timing of Ronaldo’s comments and said he had not spoken to the player before the game about his future. “Cristiano has to stay no matter what. We’ll see what happens next, but for me he should stay,” said the Frenchman. Ramos also urged Ronaldo to remain at the club but said his team mate had to make clear what he meant. “I’m sure Cris will speak at the end of the season. If there’s something behind this, he should come and clarify what it is today,” Ramos said.