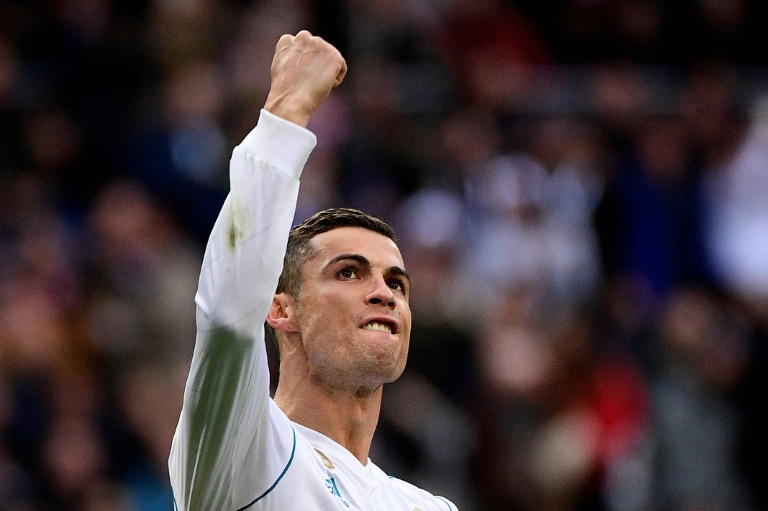 MADRID (AFP) Real Madrid sent a warning to Barcelona just two weeks ahead of El Clasico by storming back into form as Cristiano Ronaldo scored twice in a 5-0 thrashing of Sevilla on Saturday.

Sevilla had started the afternoon on the same number of points as Madrid in joint fourth, but the sides looked worlds apart as Real scored all five goals before half-time to close to within five points of Barca at the top of the table.

Nacho got the hosts off to a perfect start before Ronaldo doubled his La Liga tally for the season with a cool finish and a penalty inside the half-hour mark.

Valencia moved to within two points of Barca as Dani Parejo's penalty 10 minutes from time earned a 2-1 win over Celta Vigo.

However, Barca can regain their eight-point advantage over Real and five-point lead at the top when they visit Villarreal on Sunday.

Real's spirits were lifted even before kick-off as Ronaldo showed off his record-equalling fifth Ballon d'Or to an adoring Santiago Bernabeu.

There had been concern in Madrid ranks all week at the European champions' lack of defensive options with Sergio Ramos, Dani Carvajal and Casemiro all suspended and Raphael Varane injured.

However, it was Sevilla who looked like the side without a defence as they gifted the hosts the opener after just three minutes.

"I am happy for Cristiano to get his goals and the fact some players who haven't had so many minutes did so well."

A harmless corner to the back post saw Sevilla duo Simon Kjaer and Luis Muriel get in each other's way and present Nacho with a gift to fire home from point-blank range.

"We ask for forgiveness because we didn't expect to lose by so many goals," admitted Sevilla defender Gabriel Mercado.

"Once again in the first goal we concede from a set-piece and every shot they had went in."

- Abu Dhabi next for Real -

Ronaldo had just become the first player to score in all six games of a Champions League group, but there had been a stark contrast between his stunning European form and his lack of goals in La Liga.

Ronaldo's penalty then had just enough power to beat Sergio Rico after Jesus Navas handled inside his own area.

Madrid goals kept coming before half-time as a lovely one-two on the counter-attack between Kroos and Lucas Vazquez left the German midfielder with a simple finish.

Hakimi then made it five with his first Madrid goal from a narrow angle after being played in by Karim Benzema's inch-perfect pass.

With Madrid facing a busy fortnight as they jet off to Abu Dhabi to defend the Club World Cup on Sunday before hosting Barca, Zidane's men understandably took their foot off the gas after the break.

"It was very important to win like that before travelling for our morale," added Zidane.

"It is better to travel with this result. Now we can think about doing things well in the game on Wednesday and trying to win another trophy."

By contrast, Valencia relied on the finest of margins to edge out Celta to remain Barca's closest challengers.

Simone Zaza ended a six-week goal drought as he flicked home Parejo's corner at the near post to hand Valencia a half-time lead.

Celta, who became the first visiting side this year to take points from Barca's Camp Nou last weekend, were on course for another excellent point when Iago Aspas stabbed home from close range early in the second half.

However, the visitors were furious when Pablo Hernandez was adjudged to have tripped Nacho Gil inside the area and Parejo was given the chance to drive the resultant penalty past Sergio Alvarez despite the Celta 'keeper's best efforts.