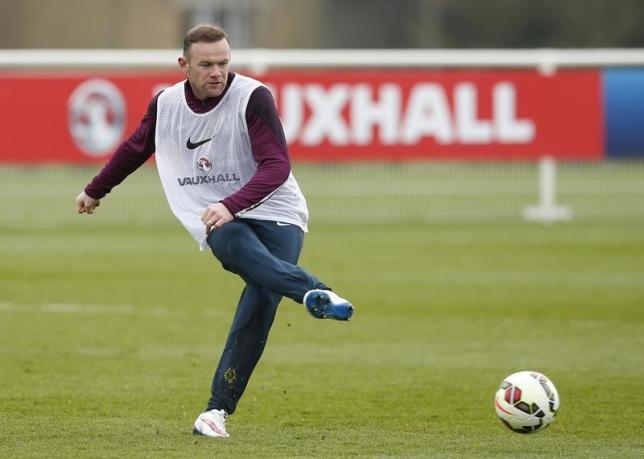 LONDON - Wayne Rooney might break Bobby Charlton's 45-year-old England scoring record of 49 goals this season but he must be successful at a major championship to be regarded as one of the country's greats said coach Roy Hodgson. Rooney, who will be 30 in October, has scored 47 goals in 102 appearances for England and could overtake Peter Shilton's all-time appearance record of 125 caps as well as Charlton's scoring tally before his international career is over. But Hodgson says his skipper must do more than break records to rival Charlton's legacy as one of England's all-time greats. "To do it, a player would have to be very successful at a European Championship or World Cup as Bobby Charlton was," Hodgson said after the 4-0 Euro 2016 qualifying victory over Lithuania at Wembley on Friday. Charlton, who scored his 49 goals in 106 games between 1958 and 1970, won the World Cup with England in 1966 but Rooney is yet to progress beyond the quarter-finals in five major finals. "People would argue Bobby was England's best ever player -- and there wouldn't be many of my age who would have him outside the top three," said the 67-year-old national team manager. "If Wayne can break into that in the future before he stops playing, then that is fantastic for him. "Bobby Charlton, for me, is up there on a pedestal and it will take time for any of the modern-day players to get up to that level." Rooney could have equalled Charlton's scoring record in the win over Lithuania because as well as scoring in the sixth minute, he hit the post in the fourth and the bar after 19. As it is, his 47th goal means he is one behind Gary Lineker, who scored 48 in 80 games, and will get another chance to close in on their totals in Tuesday's friendly against Italy in Turin. Hodgson, though, certainly holds Rooney in the highest esteem, emphasising he is assured of his place in history. "He will be remembered," Hodgson said of the Manchester United striker. "We don't have that many players who have played 100 games for England or captained England, so don't worry about Wayne Rooney not being remembered - he will be." - Reuters