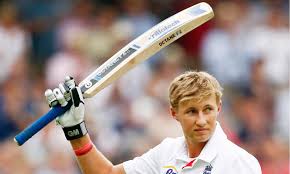 LONDON - England's Joe Root has moved to the top of the world test batting rankings after scoring two centuries and two fifties in the first four Ashes tests against Australia. The 24-year-old right-hander made 130 in the fourth match at Trent Bridge to help England crush Australia by an innings and 78 runs on Saturday to reclaim the Ashes. Root, who has made 443 runs at an average of 71.79 in the series, replaced Australia's Steve Smith at the top of the list. Smith dropped to third behind South Africa's AB de Villiers. "I put my form down to hard work, being very relentless in your practice and doing the things you don't want to -- you've got to face bowling in practice that whistles around your head," Root told reporters. Root has scored eight centuries in 31 tests since making his debut against India in 2012. England paceman Stuart Broad climbed to second in the bowling rankings after taking career-best figures of 8-15 as Australia were dismissed for 60 in their first innings at Trent Bridge. South Africa's Dale Steyn tops the list. Root became the sixth England player to head the rankings after batsmen David Gower, Graham Gooch and Michael Vaughan, and bowlers Ian Botham and Steve Harmison. - Reuters