Root makes hay as England pile on the agony 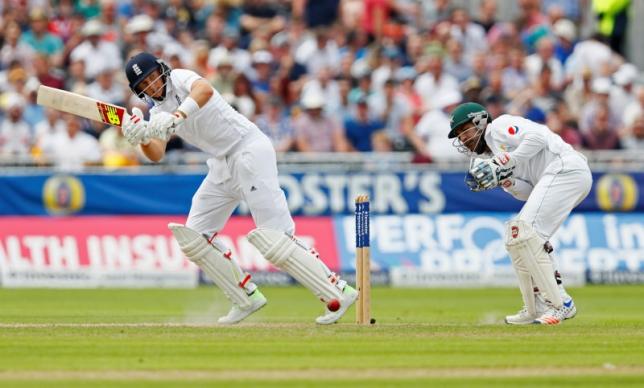 Root makes hay as England pile on the agony

MANCHESTER – Joe Root powered past 200 as England moved on to 533 for six at tea on the second day of the second test against Pakistan in Manchester on Saturday. Root, who had batted for exactly 10 hours, was on 226 not out at the interval, the right-hander's highest test score signalling a return to form after a disappointing series against Sri Lanka. England will look to declare early in the final session at Old Trafford as they bid to level the series after Pakistan won the first test at Lord's by 75 runs. The hosts had resumed in the morning on 314 for four and nightwatchman Chris Woakes dominated the early strike, peppering the boundary with crisp drives and cuts. Root went past 150 for the fifth time in his test career but he did offer one chance which was spilled by Younus Khan at slip off leg-spinner Yasir Shah. Woakes continued his fine run of form, hitting eight fours and a six on the way to his second test half-century before he poked a return catch to Shah and departed for 58. Ben Stokes, returning to the side after injury, made a fluent 34, including five fours, and shared a sixth-wicket partnership of 57 with Root who went past 200 with a perfectly executed reverse sweep off Shah. Stokes nicked a catch down the leg-side to wicketkeeper Sarfraz Ahmed off Wahab Riaz which was given out after a lengthy review but Jonny Bairstow kept up the momentum with a busy unbeaten 32. SCOREBOARD