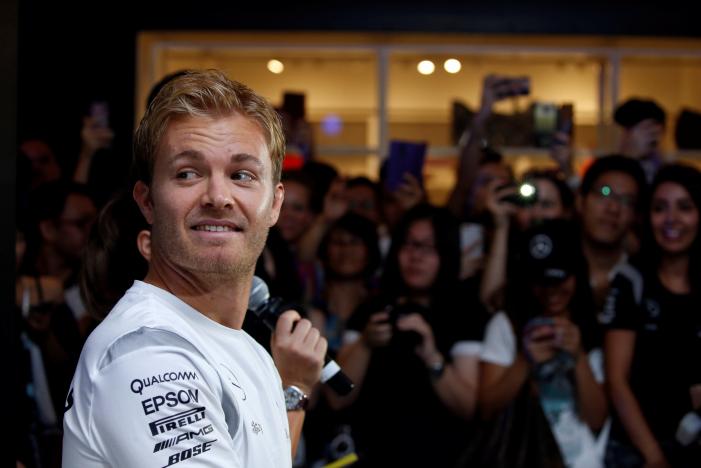 SINGAPORE – Nico Rosberg has welcomed Liberty Media's takeover of Formula One with the German Mercedes driver believing the series will benefit from the "breath of fresh air" its new American owners are likely to provide.
The deal struck earlier this month is valued at $8 billion including debt and gives the American media and telecoms business effective control of a sport run for so long by British chief executive Bernie Ecclestone. "I think it's good, for sure," Rosberg, second in the standings behind team mate Lewis Hamilton, told reporters on Thursday ahead of the weekend's Singapore Grand Prix. "Bernie (Ecclestone) and his partners have run the business for all of these years and have done a great job... as we can see with the price tag," added the driver who will celebrate his 200th Formula One race on Sunday. "So someone must have done an amazing job to get that price tag on our sport, just for the commercial rights, that's pretty impressive. "I think the world is changing a lot and it's cool sometimes to get a breath of fresh air in the shape of a new competent group of people, who will bring along some new ideas." Rosberg also believes the new owners are well positioned to exploit fresh markets for Formula One, away from its traditional fan bases. "I am excited about that, maybe especially as they (Liberty Media) come from America and Americans are often one step ahead in terms of technology and television, so it could be promising and I look forward to seeing what they come up with," he added. "Hopefully they can make us stronger in America as well, as there are so many people there who could be passionate about our sport if we bring it to them in a good way. "Even in Europe and around the world there are so many young people who love our sport but don't actually watch because they won't tune in at a specific hour or make the effort to find out when a race starts... "This is the era with live in and maybe that needs to be improved for young people and for us, to reach out to more people who love our sport but don't necessarily tune in to watch when the race is on." –Reuters