Rosberg faster than Hamilton in Bahrain 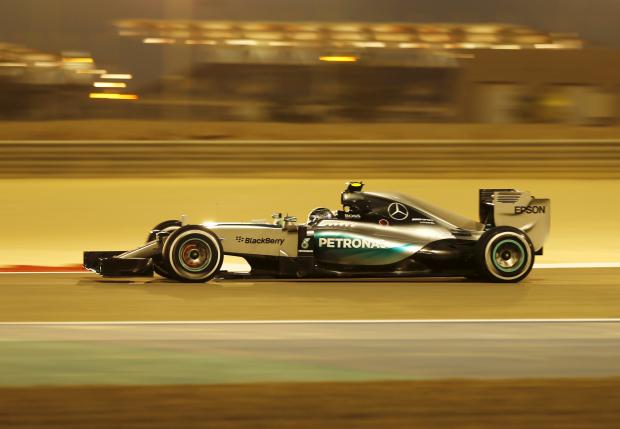 Rosberg faster than Hamilton in Bahrain

MANAMA - Nico Rosberg rose to the challenge by lapping faster than Mercedes team mate Lewis Hamilton in practise for the Bahrain Grand Prix on Friday. The German, who has been beaten by the double Formula One world champion in all three races so far this season, topped the timesheets with a best time of one minute 34.647 seconds on soft tyres in the second, floodlit session. Championship leader Hamilton was second overall, 0.115 slower, after losing time when he made a mistake and locked up a front tyre into turn eight on his fastest lap. He also ended the day with a stewards' enquiry hanging over him and Ferrari's Kimi Raikkonen for possible pit lane infringements in driving around cars that had stopped for practise starts. The Mercedes drivers had accused each other of driving too slowly, Hamilton in dictating the race pace and Rosberg for failing to overtake him, after last weekend's Chinese Grand Prix won by the Briton. After a quiet opening session, with Mercedes focussing on long runs and clocking only the 15th and 16th fastest times while Ferrari set the pace, normal service was resumed in the evening. "It was a good day today," said Rosberg, who faces a trickier task in qualifying on Saturday with a sandstorm forecast. "We’ve learned that it is pointless driving at lunchtime because we don’t learn anything because the race is in the evening and it’s such different conditions. "In the evening we learned that we were very quick on one lap again and the Ferrari is very dangerous to us on the long run because they have serious pace." Hamilton agreed with that assessment: "I think they’re going to be very close. They look very good, from what I can see, in the long run." Raikkonen, who had led team mate Sebastian Vettel in the blazing afternoon heat with a best lap of 1:37.827, was the third fastest in the second session with Vettel fourth. Vettel also had a post-practice trip to the stewards after a collision with the Force India of Mexican Sergio Perez that temporarily brought out the red flags due to front wing debris from the Ferrari on the track. The session then resumed with 10 minutes remaining. Finland's Valtteri Bottas was third and fifth fastest respectively in the two sessions for Williams with Australian Daniel Ricciardo sixth in the later one for Red Bull. McLaren's Spaniard Fernando Alonso was seventh and 12th on the timesheets but team mate Jenson Button had a miserable day. The 2009 champion failed to record a lap time after an electrical problem sent him spinning on track to a standstill in the opening minutes, and was again sidelined in the evening session after just three laps before returning later. "Hopefully we don't have any issues so I can get some running in tomorrow to see what the car is doing, because when you are thrown in at the deep end here it is quite tricky with braking," said Button. Mercedes are favourites for Sunday's race, with fans hoping to see another duel in the desert between Hamilton and Rosberg after last year's thriller. "With these tyres and with Ferrari in the mix, I think we could see a real special race here," Hamilton said. - Reuters