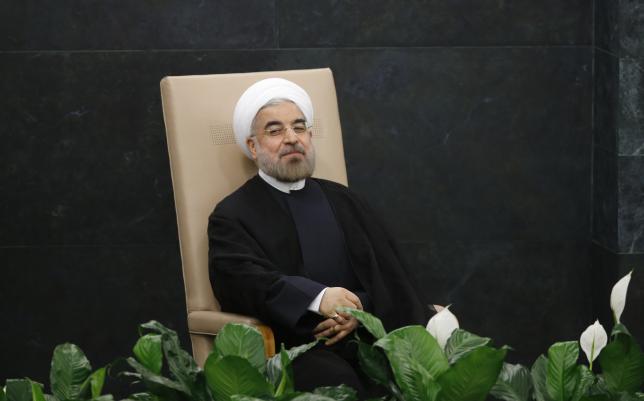 DUBAI/BEIRUT - President Hassan Rouhani affirmed his confidence in Iran's nuclear deal with world powers on Sunday, tackling the criticisms of hardliners and highlighting the achievements of his two-year-old presidency. With one eye on a likely run for re-election in 2017, Rouhani used a live interview on state TV to tout the deal as a new "third way" for Iranian foreign policy, dismissing hardliners' criticism that he had capitulated to the West. "This idea that we have two options before the world, either submit to it or defeat it, is illogical: there is also a third way, of constructive cooperation with the world in a framework of national interests," he said. "We worked with the United Nations without war or pleading or surrender, but with logic, negotiation and diplomacy in a legal path," he said, avoiding any direct mention of the United States or other Western powers. He also touted the economic achievements of his government, which has brought inflation down from highs above 40 percent and restored economic growth, trends that should be maintained by the promised sanctions relief. Rouhani downplayed the risk that nuclear inspections could jeopardize Iran's state secrets and defensive capabilities, a key line of attack by hardliners in the security establishment who fear a military attack by Western powers. Supreme Leader Ayatollah Ali Khamenei had forbade giving U.N. inspectors access to military sites, and it was only with delicate wording that this sticking point was resolved in the deal. "We will not give away even the smallest national secret, whether military, scientific, commercial or societal ... our defensive capability won't be diminished at all," Rouhani said. He invoked popular support for the diplomatic opening, casting his election victory two years ago as a "referendum" on how Iran should conduct itself on the world stage. "From their perspective, yesterday we were a threatening country and now we are a country with which a deal needs to be struck." - Reuters