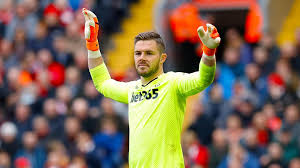 (Reuters) - Stoke City manager Gary Rowett hopes goalkeeper Jack Butland would resist any offers from top-level clubs and stay with the Championship side as they prepare for their league opener at Leeds United on Sunday.
Butland, who has won eight caps for England and was part of their World Cup squad, featured in all but five of Stoke’s 41 matches in all competitions last season. Their relegation from the Premier League last season prompted speculation that several top-tier sides were keen to sign Butland but Rowett said there had been offers worth considering. “I expect him to stay, I hope he stays,” Rowett told BBC Radio. “I’m also pragmatic enough to know it’s football and anything can happen in the last few days of the window. “... We haven’t had an offer which the club feel is financially viable - or I don’t think any strong offer yet. “Jack has never made any real moves to want to leave and he’s contracted to us and we’re not even a week away from the first game.”