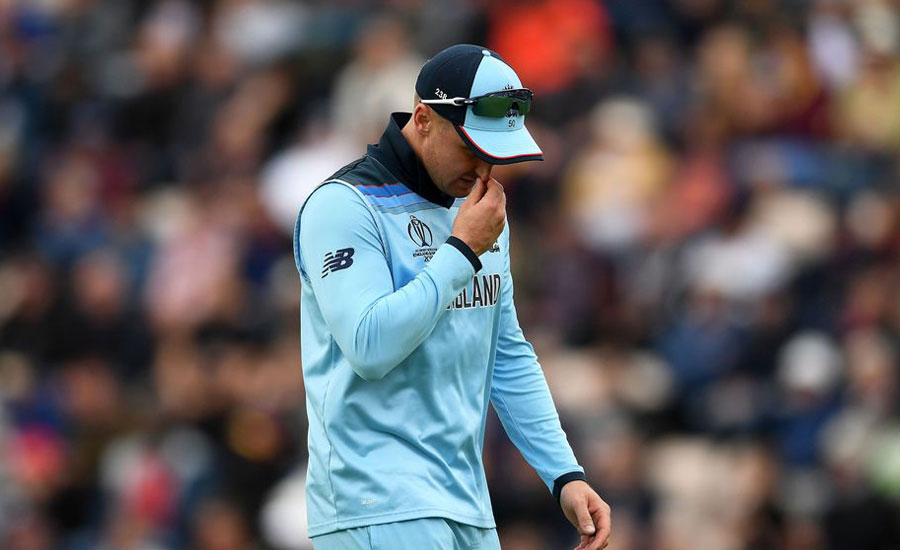 LONDON (92 News) - England opening batsman Jason Roy, who left the field during the team's eight-wicket win over West Indies, has been ruled out of their next two matches, against Afghanistan and Sri Lanka, an England and Wales Cricket Board release announced on Monday, 17 June.
Roy had left the field during the West Indies innings with what was believed to be hamstring tightness. He did not return to bat, with No.3 Joe Root partnering Jonny Bairstow at the top of the order and seeing England home with an unbeaten century. Roy was subsequently sent for an MRI scan on Saturday in London, and the scans have confirmed a hamstring tear. Roy will be reassessed as the week goes along, but is certain to miss the next two games. Roy's injury comes as a major blow to England's World Cup campaign. The opener had racked up scores of 54, 8 and 153, and is among the top scorers in the tournament, before being hit by the injury. With an in-form Roy out of commission for the forseeable future, England will now desperately hope that their captain Eoin Morgan can recover from the back spasms that had forced him, like Roy, to exit the field against West Indies. The extent of the injury was so severe that Morgan had to stand through the press conference that followed the game.

England's Jason Roy is set to miss his side's next two #CWC19 matches after suffering a hamstring tear. pic.twitter.com/WMBCh8OSy6

Like Roy, Morgan underwent scans over the weekend, as well as further treatment. But there is no definitive word yet on his availability for the Afghanistan game. As per the ECB's update, the spasms have eased a little bit, but his condition will continue to be monitored over the next 24 hours, with a call to be taken on the morning of the match. Morgan admitted after the West Indies game that the injuries to him and Roy were a matter of concern, but assured that England weren't panicking yet. "I think when any two players go down, it is a little bit of a worry," he had said after the game. "I don't think -- we are not at panic stations or anything yet. We will just see how we get on in the next 48 hours and go from there." Roy's exit paves the way for 28-year-old Hampshire batsman James Vince to make his World Cup debut. Vince was a part of the England squad that swept Pakistan 4-0 before the World Cup, notching up solid scores of 43 and 33 in two outings, before making 64 against Australia in a warm-up game. Vince's entry would also mean Root returns to his regular position at No 3.