Ruckus in Jammu and Kashmir Assembly over beef ban issue 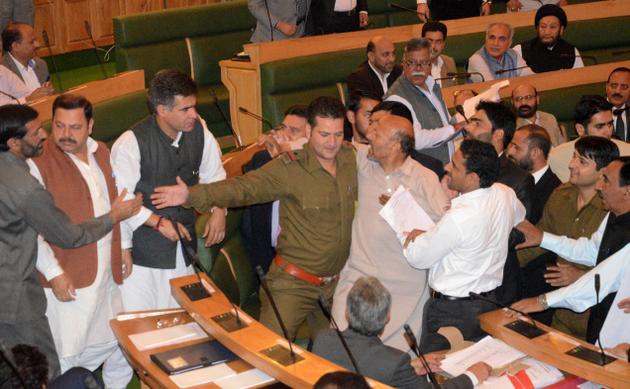 Ruckus in Jammu and Kashmir Assembly over beef ban issue

SRINAGAR (92 News) – Chaos prevailed in the Jammu and Kashmir Assembly today as banner-waving legislators of opposition National Conference and Congress stormed the well over beef ban and other issues. As soon as the house assembled, National Conference (NC) and Congress members started their protest, displaying banners in the well of the House against alleged ‘politics over flood relief’ and tax on vaishno devi pilgrims. The NC members raised slogans against the beef ban and what they termed as “interference in religious matters”. The lawmakers raised slogans against the BJP-PDP coalition government and accused it of exploiting the flood victims. A few of them were stopped by marshals as they charged towards the treasury benches. The National Conference and Congress members were joined by independent MLAs Shiekh Abdul Rashid and Hakim Mohammad Yasin. The Speaker of the assembly adjourned the House twice as the opposition members did not relent.