ISLAMABAD (92 News) – The National Assembly (NA) turned into fish market as the opposition parties staged protest against the arrest of Sindh Assembly Speaker Agha Siraj Durrani. Members of the ruling Pakistan Tehreek-e-Insaf and opposition engaged in a war of words during a session of the National Assembly However, the opposition members attended the NA session wearing as black ribbons on arms and raised slogans against the detention, demanding to release the speaker immediately. It is worth mention here that National Accountability Bureau (NAB) arrested Sindh Assembly Speaker Agha Siraj Durrani in assets disproportionate to his known sources of income and funds embezzlement cases. 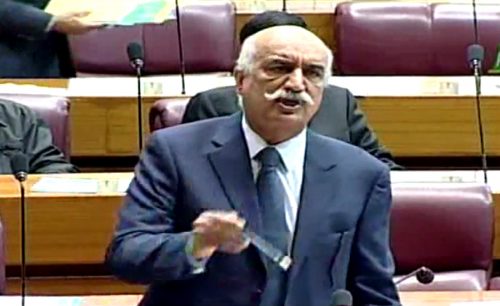 Addressing the floor of NA, Pakistan Peoples’ Party (PPP) senior leader Khursheed Shah condemned the arrest of Agha Siraj Durrani. Lashed out at the NAB, he termed that dragging the elected member of assembly and speaker was a new function of ‘Naya Pakistan’ while the probe was still under way. Khursheed Shah mentioned, “The Parliament is superior to all other institutions, and all institutions should be independent and worthy of respect.” He said that the speaker is custodian of the assembly, asking that if the speaker becomes weak how the affairs of assembly can run. “No matter who occupies the seat of an assembly, a speaker deserves respect, he added.

The PPP leader announced to protest the arrest at all levels and warned that “our protest should not be taken as a mere war of words.” “We will protest at all levels. This is the first time in the country’s 70 year history that an elected speaker has been arrested.” He further said that the arrest of current speaker is insulting action, this will set new example in the history of Pakistan. “It may be possible that Sindh chief minister will be arrested tomorrow from his office.” A day earlier, Sindh Assembly Speaker Agha Siraj Durrani was taken into custody from a five-star hotel in Islamabad. Durrani has been arrested in a case pertaining to owning assets beyond his known sources of income. Last year, NAB had initiated three separate inquiries against Durrani over funds embezzlement and disproportionate assets charge. The anti-graft watchdog had summoned the speaker several times to appear before the anti-graft watchdog body for interrogation in the case, however, Durrani failed to comply with the order which led to his arrest by NAB today.