ISLAMABAD (92 News) – The National Assembly budget session turned into fish market when it begins on Friday, the Pakistan Peoples’ Party demanded production order of Asif Ali Zardari. According to the details, the NA session was started in chaos as PTI MNAs created a ruckus while former prime minister Raja Pervez Ashraf tried to address the assembly. When the point of order for the session was announced, PPP protested against the non-issuance of Zardari’s production orders. The speaker asked Leader of Opposition in National Assembly Shehbaz Sharif to begin his address. Shehbaz Sharif said that Ashraf wanted to say something and he should be given the time to speak. Taking the floor, the PPP leader brought up the production orders of Zardari. 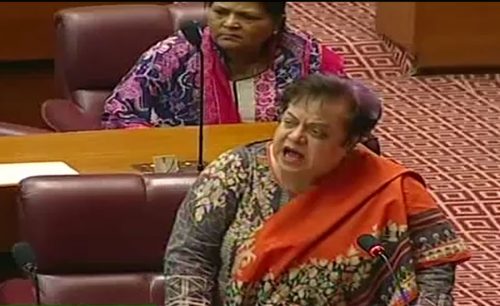 Pakistan Tehreek-e-Insaf (PTI) MNA Shireen Mazari recorded her protest when the speaker Asad Qaisar gave dais to Shehbaz Sharif. The members of treasury benches denied to listen Shehbaz Sharif addres for giving him the dias. Chaudhry Ghulam Sarwar, Fawad Chaudhry and raja Riaz stood on their seats and demanded to speak on the point of order. A ruckus was witnessed during a NA session when treasury benches protested over allowing opposition leader Shehbaz Sharif to address the house. The government leaders also chanted slogans regarding water issue in the Karachi when Pakistan Peoples Party’s (PPP) Raja Pervaiz Ashraf took NA floor. Raja Pervaiz Ashraf questioned that how can this government provide containers to the opposition parties to protest when it’s not allowing us to talk in the assembly.” Initially, NA Speaker Asad Qaiser adjourned proceedings for ten minutes. Meanwhile, the chaos persisted even after the proceedings resumed, forcing the speaker to adjourn the session till 2pm.