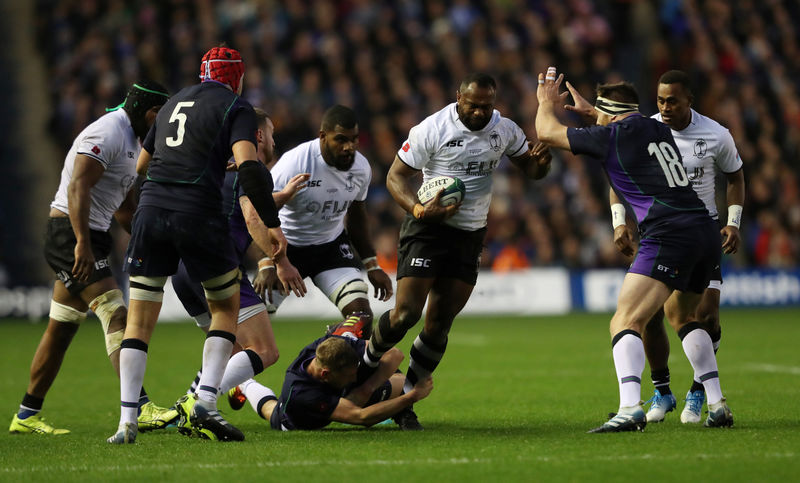 EDINBURGH (Reuters) - Wing Tommy Seymour scored a hat-trick of tries but it was Scotland’s forward dominance that laid the platform for a comfortable 54-17 victory over ill-disciplined Fiji in their November international at Murrayfield . The Pacific islanders, at one stage reduced to 13 players, looked dangerous with ball in hand but Scotland starved them of possession and used their superior pack to wear down their opponents before unleashing their back line in the second period. Prop Allan Dell, hooker Fraser Brown, wing Sean Maitland, flanker Jamie Ritchie and replacement flyhalf Adam Hastings also scored tries for the Scots, while captain Greig Laidlaw kicked five conversions as they avenged a 27-22 loss in Suva last year. Fiji led until the final few minutes of the first half as they capitalised on some poor Scotland tackling to score tries through Edinburgh number eight Viliame Mata and impressive centre Semi Radradra, but they could not sustain their intensity. Dell and Brown bulldozed their way over the Fijian try line from close range inside the opening 20 minutes, before the visitors stunned their hosts when Mata powered in under the posts and Radradra finished off a sweeping move that showcased their skill and daring with the ball in hand. But Scotland started to use their pack to keep the ball away from their opponents and that pressure told as locks Tevita Cavubati and Leone Nakarawa were both sin-binned for infringements close to their try line in the closing stages of the first half. The home side used that advantage and when Fiji ran out of defenders out wide, Seymour crossed unopposed to give his side a 21-17 halftime lead. Maitland added his name to the scorers list just after the break, before Scotland began to stretch a tiring Fijian side as Seymour clinched two more scores for his first international hat-trick and first points in nine tests.