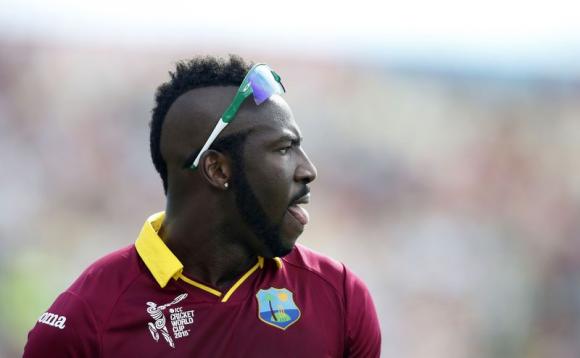 MELBOURNE (Reuters) - Rumours of the demise of West Indies cricket seemed greatly exaggerated after the crushing defeat of Pakistan on Saturday and it was a member of the new generation in Andre Russell that breathed new life into the islanders' World Cup. The mohawked all-rounder earned man-of-the-match for blasting 42 from just 13 balls against Pakistan's hapless death bowlers then following up with three wickets in the 150-run thrashing in Christchurch. Long-suffering fans of West Indies cricket have grown wary of false dawns, but Russell's performance will have given them some hope the team can move on from a crippling dispute over players' contracts. It was also further evidence of the talent that abounds in the clutch of island nations and that critics lament is often left to wither on the vine. Twenty-six year-old Russell has played 45 one-day internationals, earning man-of-the-match honours five times, but boasts a solitary test on his resume way back in 2010 when a callow 22-year-old. The door has been slammed ever since, as it has been for a number of West Indies' more exciting talents in the shorter formats, including all-rounder Kieron Pollard, who was omitted from the World Cup squad after the contracts crisis. Dwayne Bravo, another controversial omission from the World Cup, also played his last test in 2010 and announced last month he had given up on playing in the longer format altogether. Along with spin bowler Sunil Narine, who pulled out of the World Cup squad citing a lack of confidence in his bowling action, their omissions from the World Cup have made Russell a de facto senior player in a raw outfit captained by a rookie in 23-year-old paceman Jason Holder. West Indies fans will hope fast bowling all-rounder Russell can continue to lead from the front, though mindful the player knows only one way. A celebrated slogger in Twenty20 competitions across the globe, Russell smashed four sixes in his 42 against Pakistan and might have felt unlucky he was denied a crack at the fastest ODI half-century by the completion of the allotted overs. "I can bat if there's 20 overs still left to go, but I think I really enjoy when there's five overs or 10 overs left," Russell said after the Pakistan win. "I can come out and just play my natural game. It's not like I have to be cagey." The knock was part of another rearguard action by a middle and lower order which had to scrap hard to get West Indies past 300 in the upset loss against Ireland. Detractors say Caribbean cricket's problems start from the top down, and the observation has certainly rung true at the World Cup where senior players like Chris Gayle, Dwayne Smith and top order batsman Marlon Samuels have been passengers. After Tuesday's match against Zimbabwe in Canberra, West Indies play a wounded South Africa on Friday in Sydney. They will need all hands on deck against the Proteas who will doubtlessly be hell-bent on making amends for their shock humiliation by India in Melbourne on Sunday. "Playing as a team you're always going to get the job done if everyone contributes," said Russell.