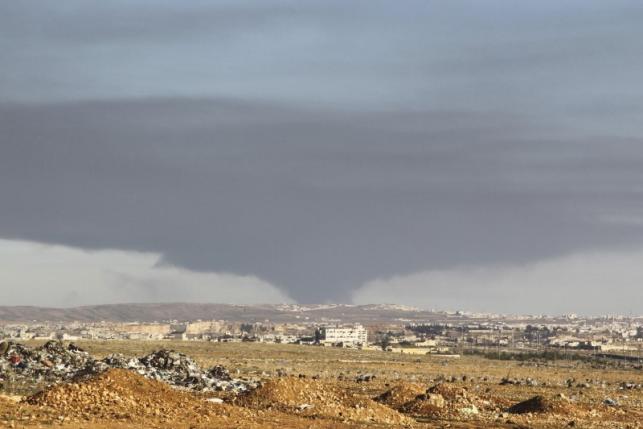 BEIRUT/MOSCOW/LONDON - Russia said it suspected Turkey was preparing a military incursion into Syria, as a Syrian army source said Aleppo would soon be encircled by government forces with Russian air support.

Turkey in turn accused Moscow of trying to divert attention from its own "crimes" in Syria, and said Aleppo was threatened with a "siege of starvation". It said Turkey had the right to take any measures to protect its security.

In another sign of the spreading international ramifications of the five-year-old Syrian war, Saudi Arabia said it was ready to participate in ground operations against Islamic State in Syria if the US-led alliance decided to launch them.

The United States welcomed the Saudi offer, which together with any Turkish incursion would further embroil regional powers in a conflict that pitches Sunni-backed fighters against Damascus and forces backed by Moscow and Shi'ite Iran.

The United Nations on Wednesday suspended the first peace talks in two years, halting an effort that seemed doomed from the start as the war raged unabated. Washington said on Thursday however it was hopeful they would resume by the end of the month, and Russia said it expected that no later than Feb. 25.

Donors convened in London to tackle the refugee crisis created by the conflict. British Prime Minister David Cameron said they raised $11 billion for Syrian humanitarian needs over the next four years.

Turkey said at the conference up to 70,000 refugees from Aleppo were moving toward the border to escape air strikes.

Four months of Russian air strikes have tipped the momentum of the war Assad's way. With Moscow's help and allies including Lebanon's Hezbollah and Iranian fighters, the Syrian army is regaining areas on key fronts in the west.

Russia's defence ministry said it had registered "a growing number of signs of hidden preparation of the Turkish Armed Forces for active actions on the territory of Syria".

Any Turkish incursion would risk direct confrontation between Russia and a NATO member.

"The Russians are trying to hide their crimes in Syria," said a senior official in Turkish Prime Minister Ahmet Davutoglu's office.

"They are simply diverting attention from their attacks on civilians as a country already invading Syria. Turkey has all the rights to take any measures to protect its own security."

In London, Davutoglu said the "humanitarian logistic corridor" between Turkey and Aleppo was "under the invasion of these foreign fighters and regime forces (with) the support of Russian warplanes".

"What they want to do in Aleppo today is exactly what they did in Madaya before, a siege of starvation," he added.

Davutoglu pledged that whatever the cost Turkey's door would remain open to all Syrians. It has already taken in more than 2.5 million.

Relations between Russia and Turkey have deteriorated badly since Turkey shot down a Russian warplane near the Syrian border in November.

State Department spokesman John Kirby declined to comment on Turkish military operations on the Syrian border, saying only: "They are working to secure that stretch of border, but I'm not going to comment on specific military activities of another nation inside their borders."

Aleppo, just 50 km (30 miles) south of the Turkish border, is a major strategic prize in the war and is currently divided into areas of government and opposition control. Many of the rebels fighting in and around the city have close ties to Turkey.

This week, three days of intensive Russian bombing helped the army and allied fighters to sever a major supply line to the northwest of the city, in the process reaching two Shi'ite towns loyal to the government for the first time in 3-1/2 years.

The army source said operations to fully encircle Aleppo from the west would be launched soon.

"Qassem Soleimani is there in the same area," said the source, referring to the head of the Iranian Revolutionary Guards' elite Quds force responsible for overseas operations.

Residents thanked Assad, Iran and Hezbollah in celebratory scenes from the Shi'ite towns of Nubul and al-Zahraa broadcast by Hezbollah's al-Manar TV.

The powerful Kurdish YPG militia, which controls wide areas of northern Syria, meanwhile added to the pressure on insurgents, capturing two villages near Nubul and al-Zahraa, the Syrian Observatory for Human Rights reported.

The Syrian Kurds have consistently denied opposition claims that they cooperate with Damascus.

In the south, the Syrian army and its allies recaptured a town near the city of Deraa, building on gains made last week and also backed by instensive aerial bombardment. The seizure of Ataman would allow the government to reassert control over most parts of Deraa, near the Jordanian border.

"I think the special envoy decided to suspend the talks because the organisation did not want to be associated with the Russian escalation in Syria, which risks undermining the talks completely," a U.N. official told Reuters.

Mohammad Javad Zarif, foreign minister of Iran, called in London for the talks to resume and for an immediate ceasefire. But he said later that should not mean stopping military operations against "recognised terrorist organisations", naming the Nusra Front and Islamic State.

US Secretary of State John Kerry said his Russian counterpart Sergei Lavrov had agreed on the need to discuss how to implement a ceasefire in Syria during a call on Thursday.

The State Department said later Kerry would travel to Munich next week to seek an agreement on a ceasefire after assurances by Lavrov that Moscow was committed to a political solution in Syria.

The State Department's Kirby, however, said that Russia's pledges to end the Syria conflict through political dialogue did not match its military actions on the battlefield, where it continued to bomb opposition positions.

"We’re certainly seeing, at least in the very recent past, discordant messages" by Russia, Kirby added.

Rebel commanders said they hoped the peace talks' collapse would convince their foreign backers, including Saudi Arabia, that it was time to send them more powerful and advanced weapons, including anti-aircraft missiles.

Assad's foreign opponents have been funnelling weapons to vetted rebel groups via both Turkey and Jordan.

One rebel leader said he expected "something new, God willing" after the failure of the Geneva talks.

Another rebel commander said: "They are promising to continue the support. In what form, I don't yet know ... How it will crystallise, nobody knows ... We need to wait."

Both spoke on condition of anonymity.

While vetted "Free Syrian Army" rebels have received weapons including US-made guided anti-tank missiles, their calls for anti-aircraft missiles have gone unanswered mostly because of fears they could end up in the hands of powerful jihadist groups such as the Nusra Front, which are also fighting Assad.

A Russian defence ministry spokesman said a Russian military trainer was killed in a mortar attack on Feb. 1. "They (Russian military servicemen) are not taking part in ground operations," Kremlin spokesman Dmitry Peskov told reporters. "We are talking about advisers. This is linked to teaching Syrian colleagues to operate equipment which is being delivered to Syria under existing contracts."

A Saudi general said the kingdom was "ready to participate in any ground operations that the (US-led) coalition (against Islamic State) may agree to carry out in Syria". Brigadier General Ahmed Asseri, who is also the spokesman for the Saudi-led Arab coalition fighting Iranian-backed forces in Yemen, was speaking to Saudi-owned al-Arabiya TV. US Defense Secretary Ash Carter welcomed the Saudi offer. -Reuters