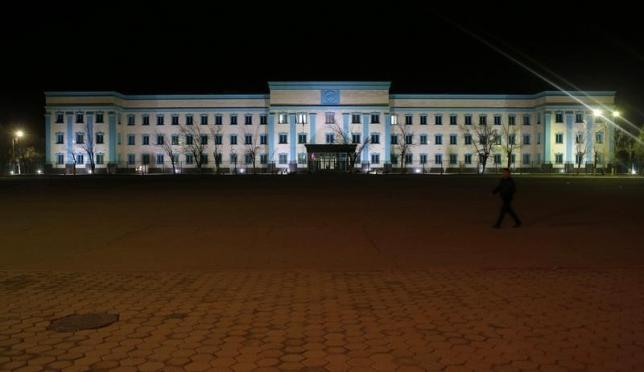 MOSCOW - Russia is cutting spending on its space program by more than a third over the next 10 years because of the country's economic crisis, forcing it to scrap plans to develop a super-heavy launch rocket. Space exploration is a subject of national pride in Russia, rooted in the Cold War "space race" with the United States that saw Soviet cosmonaut Yuri Gagarin become the first man in orbit. The collapse of the Soviet Union starved the program of funds, but President Vladimir Putin has nurtured plans for a revival. Russia is planning to develop its own space station by 2023 but economic constraints are growing. A spokesman for the Roscosmos federal space agency said planned spending would be reduced by 35 percent to 2 trillion rubles ($37.76 billion), a cut of 850 billion rubles. The Russian government has trimmed spending plans in most economic sectors as the country heads towards recession, hit by Western economic sanctions over the crisis in Ukraine and a fall in the global price of oil, its main export item. "Because of the crisis ... several research projects, including the launch of super-heavy rockets, will be removed from the program," the spokesman said by telephone. NEW COSMODROME Construction of the new Vostochny Cosmodrome in the country's far east, to replace the Baikonur launch pad in Kazakhstan, has been plagued by problems since construction began in 2011. TASS news agency quoted Russian security service officials as saying as much as 50 million rubles had been embezzled from the project. Interfax news agency said 20 construction workers at the cosmodrome had gone on hunger strike after not being paid for months. The pay dispute has not been resolved even though some of the workers appealed directly to President Putin for help during his annual televised phone-in last week. Russian media quoted Roscosmos as saying all planned payloads until 2030 would go ahead and that Russia would focus on modifying a heavy launch rocket that is already being developed rather than producing an entirely new one. Previous media reports have suggested the country could save more than $1 billion by abandoning plans to build a new launch vehicle from scratch. "Russia is a major space power and it must have its own space launch center," Putin told the cosmodrome workers. "We will of course do this, we have ambitious plans." - Reuters