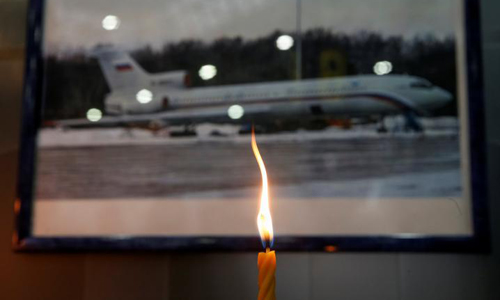 MOSCOW - Russia held a national day of mourning on Monday, a day after a Syria-bound military plane crashed into the Black Sea killing all 92 people on board, and expanded a search operation to try to recover passengers' bodies and the jet's black box. The plane, a Russian Defense Ministry TU-154, was carrying dozens of Red Army Choir singers, dancers and orchestra members to Syria where they were meant to entertain Russian troops in the run-up to the New Year. Nine Russian reporters were also on board as well as military servicemen and Elizaveta Glinka, a prominent member of President Vladimir Putin's advisory human rights council. Flags were flown at half-mast on Monday, mourners placed flowers at the airport in Sochi, southern Russia, where the plane took off from, and in front of the Moscow headquarters of the Russian Army's Alexandrov song and dance troupe. Russian Transport Minister Maxim Sokolov told reporters on Monday that pilot error or a technical fault were the most likely explanations for the tragedy. "The main versions (for the crash) do not include the idea of a terrorist act," Sokolov told a news conference in Sochi, the RIA news agency reported. "So we are working on the assumption that the reasons for the catastrophe could have been technical or a pilot error." The jet, a Soviet-era Tupolev plane built in 1983, had been carrying 84 passengers and eight crew members. Major-General Igor Konashenkov, a Defense Ministry spokesman, said on Monday that 11 bodies had been recovered so far and that a huge sea and air search operation involving around 3,500 people was being expanded. Thirty nine ships, five helicopters, a drone, and more than 100 divers were involved, he said, and soldiers were scouring the Black Sea coastline as well. -Reuters