Russia, Saudis fail in talks to agree on fate of Syria's Assad 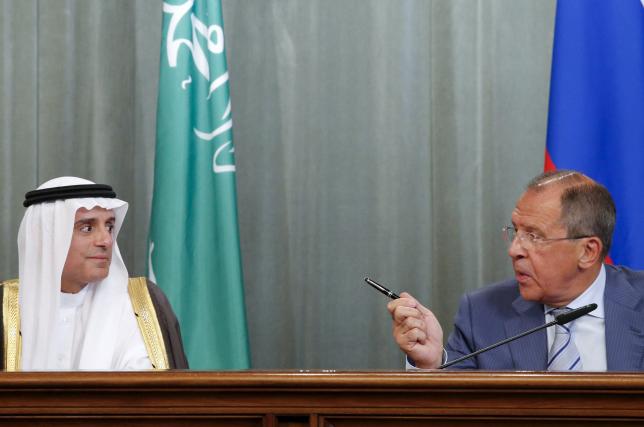 Russia, Saudis fail in talks to agree on fate of Syria's Assad

MOSCOW -  Russia and Saudi Arabia failed in talks on Tuesday to overcome their differences on the fate of Syrian President Bashar al-Assad, a central dispute in Syria's civil war that shows no sign of abating despite renewed diplomacy. Russia is pushing for a coalition to fight Islamic State insurgents -- who have seized swathes of northern and eastern Syria -- that would involve Assad, a longtime ally of Moscow. But, speaking after talks in Moscow, Saudi Foreign Minister Adel al-Jubeir reiterated Riyadh's stance that Assad must go. "A key reason behind the emergence of Islamic State was the actions of Assad who directed his arms at his nation, not Islamic State," Jubeir told a news conference after talks with Russian Foreign Minister Sergei Lavrov. "Assad is part of the problem, not part of the solution to the Syrian crisis ... There is no place for Assad in the future of Syria," he said. A statement on Syrian state media said that Damascus "strongly condemned" the Saudi minister's remarks. An uprising against four decades of Assad family rule broke out in 2011 and turned into a full-blown civil war in which Islamist militants have become the strongest element fighting Damascus. Saudi Arabia is part of a U.S.-led regional coalition conducting air strikes on Islamic State positions in Syria and neighboring Iraq, but Lavrov said this strategy was unlikely to be successful in combating the hardline Sunni Muslim fighters. Jubeir and Lavrov said they had discussed bringing various opposition groups closer together to improve their chances in tackling Islamic State. "The talks are about ... coordinating all those who are already fighting terrorists so that they put their main focus on fighting terrorism and leave for later settling scores between themselves," Lavrov said in describing Russia's proposal. Lavrov said anti-Islamic State forces united on the ground should have wide international backing. But Jubeir specifically ruled out any coalition with Assad and tension between the ministers was often visible during the conference. Lavrov said Moscow would hold separate talks with Syrian opposition representatives including the Syrian National Coalition and Syrian Kurdish Democratic Union in coming days. Moscow hopes to host another round of talks between Damascus and various Syrian opposition groups. Two earlier rounds of such consultations failed to yield any breakthrough. The ministers also discussed possible Saudi purchases of Russian arms ahead of a planned visit by the Saudi king to Moscow. - REUTERS