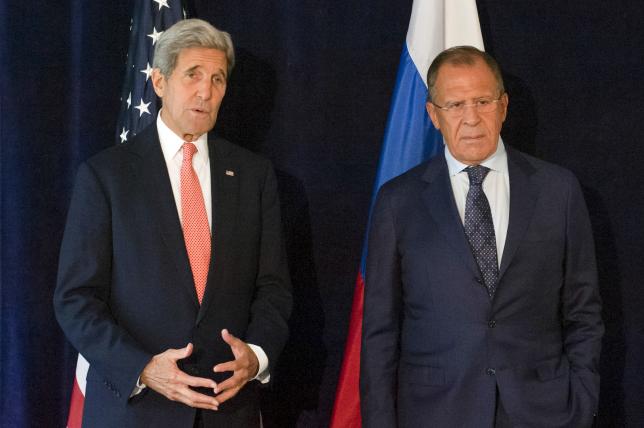 UNITED NATIONS - Russia appeared to seize the initiative in international efforts to end the conflict in Syria on Sunday as Washington scrambled to devise a new strategy for the war-ravaged country and France sent warplanes to bomb Islamic State targets. As leaders gathered in New York at the United Nations General Assembly, U.S. Secretary of State John Kerry discussed Syria with Russian Foreign Minister Sergei Lavrov. He said that while it was vital to coordinate efforts against Islamic State militants this was not yet happening. "I think we have concerns about how we are going to go forward," Kerry told reporters. U.S. officials said Kerry was working on a new political initiative in New York that would include Russia and key regional powers. A senior State Department official told reporters: "It was a very thorough exchange of views on both the military and the political implications of Russia’s increased engagement in Syria." Kerry also discussed Syria with Iran's foreign minister during a meeting at the United Nations on Saturday. It was announced in Baghdad that Russian military officials were working with counterparts from Iran, Syria and Iraq on intelligence and security cooperation to counter Islamic State, which has captured large areas of both Syria and Iraq. The move was seen in the region as potentially giving Moscow more sway in the Middle East. Russian President Vladimir Putin derided U.S. efforts to end the Syria war, which has driven a tide of refugees into neighbouring states and Europe. He said Moscow, which this month sent tanks and warplanes to a Russian military base in Syria, was itself trying to create a "coordinated framework" to resolve the conflict. "We would welcome a common platform for collective action against the terrorists," Putin said in an interview on Sunday on CBS's "60 Minutes." PUTIN DERIDES U.S. EFFORTS Putin, who will meet U.S. President Barack Obama in New York on Monday, branded U.S. support for rebel forces in Syria as illegal and ineffective and said Damascus should be included in international efforts to fight Islamic State. He mocked U.S. plans to train up to 5,400 Syrian rebels to fight the group. "It turns out that only 60 of these fighters have been properly trained, and as few as four or five people actually carry weapons," he said. Putin said Russia had no plans now to deploy combat troops. "Russia will not take part in any field operations on the territory of Syria or in other states; at least, we do not plan it for now," he said. Referring to the risk of radicalized fighters returning home after fighting with Islamic State, he said: "There are more than 2,000 militants in Syria from the former Soviet Union. Instead of waiting for them to return back home we should help President al-Assad fight them there, in Syria." Critics have urged Obama to be more decisive in the Middle East and Syria, where the United Nations has said 250,000 people have died after four years of conflict, and say lack of a clear American policy has given Islamic State opportunities to expand. Divisions over the role of Syrian President Bashar al-Assad remained critical. President Hassan Rouhani of Iran, like Russia a big military supporter of Assad, told reporters any discussion of political reform in Syria should come only after the threat of "terrorism" had been removed. The United States, Britain and some other allies in recent days have softened demands that Assad immediately leave power, raising the possibility that he could stay during a transition. U.S. Under Secretary of State Wendy Sherman said on Friday: "We do not think it is credible for Assad to remain for any length of time as the leader," but added: "We appreciate there may be a political solution here where Assad is there for some period of time in some capacity while a transition takes place." German Foreign Minister Frank-Walter Steinmeier, however, told ARD television on Sunday that the formation of a transitional Syrian government should be kept separate from discussions on the future of Assad. KEEPING THE FORCES APART A senior State Department official said if the Russians were going to play a greater role in the fight against Islamic State, it was essential to have talks on "de-confliction" - measures to avert inadvertent clashes between the militaries. "We are just at the beginning of trying to understand what the Russians' intentions are in Syria, in Iraq, and to try to see if there are mutually beneficial ways forward here. We have got a long way to go in that conversation," the official said. France said it had launched its first air strikes in Syria, destroying an Islamic State training camp in the east of the country to stop the group from attacking French interests and to protect Syrian civilians. France had until now only struck Islamic State targets in neighbouring Iraq. France had feared strikes in Syria could be counter-productive and could strengthen Assad, but it was shaken by a series of deadly attacks by Islamist militants this year. In addition, Paris has become alarmed by Islamic State gains in northern Syria and the possibility of France being sidelined in negotiations to reach a political solution in Syria. A French diplomatic source said Paris needed to be one of the "hitters" in Syria - those taking direct military action - to legitimately take part in any negotiations for a political solution to the conflict. Israel, which borders Syria and has previously attacked sites in Syria, carried out at least three air strikes against Syrian army targets on the Golan Heights on Sunday, rebel sources and a monitoring group said. -Reuters