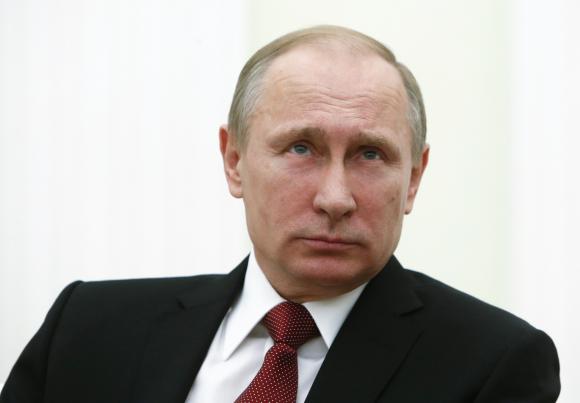 MOSCOW – More than 45,000 Russian troops as well as war planes and submarines started military exercises across much of the country on Monday in one of the Kremlin's biggest shows of force since its ties with the West plunged to Cold War-lows. President Vladimir Putin called the Navy's Northern Fleet to full combat readiness in exercises in Russia's Arctic North apparently aimed at dwarfing military drills in neighbouring Norway, a NATO member. "New challenges and threats to military security require the armed forces to further boost their military capabilities. Special attention must be paid to newly created strategic formations in the north," Defence Minister Sergei Shoigu said, quoted by RIA news agency. Shoigu said the order came from Putin, who has promised to spend more than 21 trillion roubles ($340 billion) by the end of the decade to overhaul Russia's fighting forces. Putin made his first public appearance since March 5 on Monday, an absence from view that had fuelled feverish speculation over his health as well as his grip on power. He was meeting Kyrgyz President Almazbek Atambayev at the Constantine Palace outside Russia's second city of St. Petersburg. Norway is currently holding its "Joint Viking" drills involving 5,000 troops in Finnmark county, which borders Russia in the resource-rich Arctic circle where both countries are vying for influence. Russia's drills would include nearly 40,000 servicemen, 41 warships and 15 submarines, RIA reoprted. Tensions between Russia and Europe worsened last year, leading eight northern European nations to promise to boost cooperation to counter an increase in Moscow's military activity. NATO made new allegations last week that Russia was arming separatists in east Ukraine, where more than 6,000 people have been killed in nearly a year of fighting. The West and Kiev accuse Russia of supplying arms and soldiers to support the pro-Russian separatists. Moscow denies the claims. NATO says it counted more than 100 intercepts of Russian planes into members' airspace last year, three times more than in 2013. The intercepts have forced civilian planes to change their courses and Britain scrambled Typhoon interceptor planes after two long-range bombers flew over the English Channel. Norway said its military drills had been planned before the Ukraine crisis. "However, the current security situation in Europe shows that the exercise is more relevant than ever," Lieutenant General Haga Lunde said in a statement. The Russian exercises are due to last for much of the week during which Russia will celebrate its annexation of the Ukrainian peninsula of Crimea, carried out with the help of special forces. Other drills involved 5,000 troops in Russia's eastern military district, while another exercise included another 500 troops from Russia's troubled North Caucasus region of Chechnya, the site of two separatist wars, wires reported. The exercises were meant to focus on fighting Islamist insurgents, whose movement to create a Muslim state has spread across the predominantly Muslim North Caucasus, fuelled by religion and anger at local abuse of power. –Reuters