RAWALPINDI (92 News) – Alexey Yurevish Dedov, Russian Ambassador to Pakistan, called on Chief of Army Staff (COAS) General Qamar Javed Bajwa on Thursday. According to a press release issued by the ISPR, matters related to regional security and bilateral cooperation were discussed. Later, the visiting dignitary conferred Order of Friendship, Medal for Courage in Salvation and Medal for the Commonwealth in Rescue to ten officers and two soldiers of Pakistan Army in recognition of their cooperation, commitment and audacity during search and rescue operation at Latok-1 to rescue Russian Mountaineer Alexander Gukov from 20650 feet AMSL in July 2018. The Rescue mission, spanned over six days, was carried out by Army Aviation under most hostile and challenging conditions. Russian Ambassador also presented Medal for the Common Wealth in Rescue and Letter of Commendation of Russian Mountaineering Federation to the COAS. Meanwhile, General Austin Scott Miller, Commander Resolute Support Mission in Afghanistan also called on Chief of Army Staff (COAS) General Qamar Javed Bajwa at GHQ. 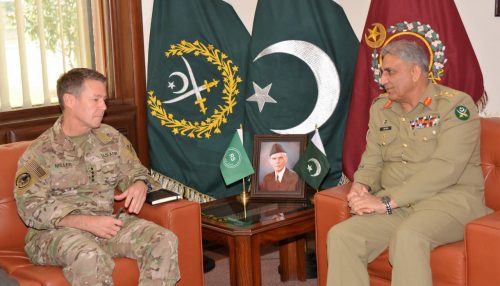 During the meeting, matters of mutual interest with particular reference to regional security and ongoing Afghan reconciliation process were discussed. Both expressed unanimity of views on importance of political resolution of Afghan situation and underlined that only an Afghan owned and Afghan led inclusive process can lead to peace in Afghanistan. They also reaffirmed the need for continuing harmonized efforts against terrorists and for effective border management. The COAS said that Pakistan is committed to efforts for peace in Afghanistan as it is important for peace in Pakistan.

All educational institutions in Punjab to be closed from Sept 6 to 11: Murad Raas