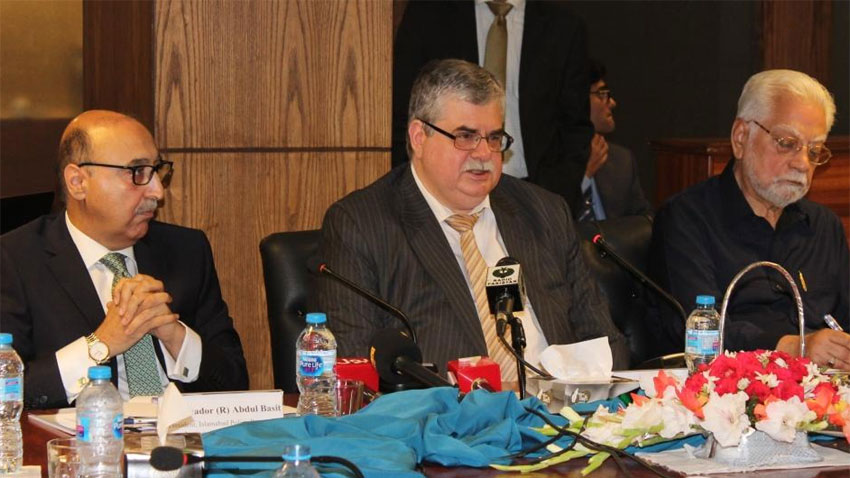 ISLAMABAD (92 News) – Russian Ambassador to Pakistan Alexey Y Dedov has lauded Pakistan's contribution in the war against terror. He was delivering a lecture on "Pakistan-Russia Relations: Is there a New Trajectory" in Islamabad today. It was organized by Islamabad Policy Research Institute. The Russian ambassador said Pakistan is facing the challenge of terrorism and it has launched effective operations against the menace. He said there is an understanding between the two countries to enhance bilateral economic cooperation. He said Pakistan and Russia are closely working in different fields including energy. Alexey Dedov said Russia wants a peaceful Afghanistan. – Russia thanks Pakistan for rescuing mountaineer – The Russian envoy thanked Pakistani authorities on behalf of the Russian government for rescuing the Russian mountaineer Alexander Gukov stranded in a northern peak. In a meeting with Deputy Chairman Senate, Senator Saleem Mandviwala, the envoy said that Russia is highly grateful to Pakistan, especially the brave and qualified pilots who managed to locate and rescue Alexander Gukov stranded at a steep slope on the Latok 1 mountain peak at a height of 20,650 feet after an intense and difficult helicopter mission and shifted to CMH Skardu. The ambassador apprised the deputy chairman that the mountaineers unlike other Russian tourists do not bring it into the knowledge of the Russian embassy before going on their climbing ventures. Deputy chairman Senate observed that it might be a better way to have a proper registration and making it obligatory to go on climbing with some local guides.