Russian Olympic chief to step down 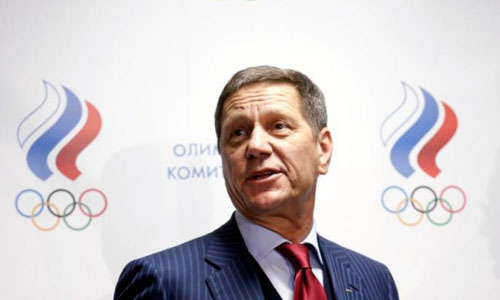 Russian Olympic chief to step down

MOSCOW- The head of Russia's Olympic Committee, Alexander Zhukov, intends to step down, in the biggest change at the top of Russian sport since a doping scandal led to the country's track-and-field athletes being excluded from the Rio Olympics.
President Vladimir Putin said late on Tuesday that Zhukov had told him he wanted to leave the role so he could concentrate on his other job as first deputy speaker in the lower house of the Russian parliament. "This is without doubt the right thing, we support it completely," Putin said at a meeting of sports officials in Vladimir region, about 250 km (150 miles) east of Moscow, that Zhukov was attending. "Alexander Dmitriyevich (Zhukov) has done a lot for sport and, I hope, will do more still," Putin added. Officials' comments made no connection between Zhukov's departure and the doping scandal, which also resulted in Russia's entire Paralympic team being barred from the Paralympic Games in Rio. A report commissioned by the World Anti-Doping Agency concluded that Russia had run a state-sponsored program to give performance-enhancing drugs to elite athletes, and to cover up positive doping tests. The report described how, in a clandestine night-time operation at the 2014 Winter Olympics in Sochi, southern Russia, positive samples were smuggled out of a lab through a hole drilled in the wall, and then replaced with clean samples. Russia acknowledged that there were shortcomings in its anti-doping operations, but said it was being unfairly singled out for punishment for political reasons while doping by other countries was ignored. Zhukov, a Putin ally and former deputy prime minister, has been president of the Russian Olympic Committee since 2010, and was chairman of the Organising Committee for the Sochi Winter Games. -Reuters