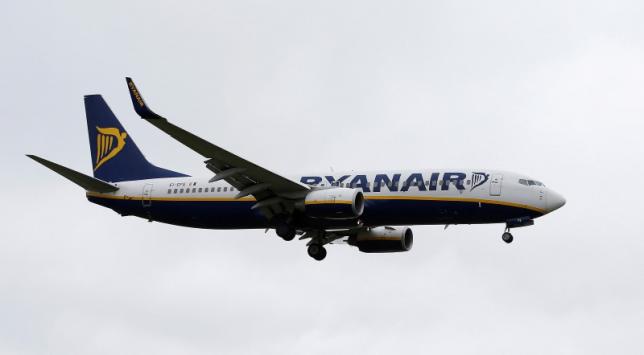 DUBLIN - Budget carrier Ryanair Holdings PLC said it remains on track for its highest-ever profit this year despite Britain's vote to leave the European Union, but warned it may yet have to review guidance since Brexit had created huge uncertainty. Chief Executive Officer Michael O'Leary said in an online presentation to investors on Monday that there remains a very real risk that profit guidance will be cut later in the year, but he "did not see the evidence to justify" a cut right now. On Monday Europe's largest airline by passenger numbers reiterated a forecast made before the June 23 Brexit referendum that profit after tax would grow 13 percent in the year to end-March 2017 to between 1.38 billion euros (1.15 billion pounds) and 1.43 billion euros (1.19 billion pounds). "I don't think any other airline in Europe will be delivering or forecasting that kind of profit growth, but all of the clouds on the horizon suggest there are significant risks to the downside in the second half of the year," O'Leary said. Rival easyJet PLC EZI.L last week said it was unable to give an earnings forecast in the aftermath of Brexit, a deadly attack in Nice and an attempted coup in Turkey, while Germany's Lufthansa (LHAG.DE) warned on profit. O'Leary said in a statement Ryanair would offset the impact of a fall in the value of sterling since the Brexit vote by shifting some capacity away from Britain starting this winter. He warned the company faced further disruption if Britain failed to secure access to Europe's Open Skies agreement, but that these risks would be manageable. Ryanair flies 40 million of its 100 million-plus passengers a year to and from Britain and has its largest hub at London's Stansted Airport. The carrier said a combination of Brexit, militant attacks in Europe and air traffic control strikes had hit average fares, which would fall by an average of 8 percent in the six months to September compared with an earlier forecast of a fall of up to 7 percent. It maintained its forecast of a fall in fares of between 10 percent and 12 percent in the winter months, compared with a year ago, but lower fares will increase passenger numbers to 117 million from an earlier forecast of 116 million. Ryanair's share price hit an all-time high in January as a drive to boost customer service levels helped it to increase passenger numbers by more than a third in three years. But it has fallen 20 percent since the Brexit vote amid concerns it would face a triple whammy of weaker sterling, a British recession and increased regulatory hurdles. -Reuters