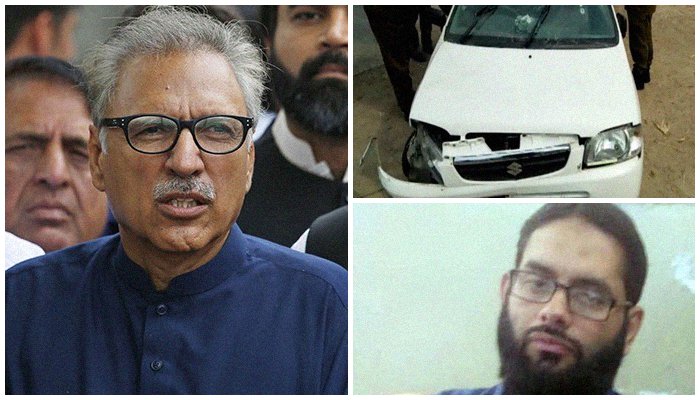 ISLAMABAD /SAHIWAL (92 News) – President Dr Arif Alvi invited the families of Khalil and Zeeshan, who were killed in an alleged encounter with Counter Terrorism Department (CTD) on Sahiwal, on Friday. As per details garnered, the victims’ families left for travel to Islamabad to meet the president. The police officials said that Zeeshan’s family including his brother Ehtisham and his mother among Khalil’s brother Jamil are being travelling to the capital city. It was reported that the police have arranged for their transport. It also sid that the victims’ families were invited in the Presidential’s House. Further, Senate Chairperson Mir Sadiq Sanjrani is also expected to meet Ehtisham and his mother. A picture of Zeeshan has also been surfaced with Usman, another terrorist killed in Faisalabad. The sources revealed that details of the vehicle – used in Sahiwal incident – was owned by a terrorist named Adeel Hafeez who was killed in Faisalabad during the operation of security forces. It also said that he bought the car for Rs680,000 through an online application on May 9, 2018 from a man named Saqib Muhammad. However; the vehicle was under the use of Zeeshan. It was also reported that the terrorists was contacted from the mobile phone of Zeeshan Javed. He also expressed desire to make as suicide bomber. He has been suspected of having links with Daesh. On the other hand, the records obtained by the JIT, the car — with a registration number plate LEA-6683 — was first registered to Samina Muqaddar, a resident of Lahore, in March 2012 and transferred to Shaukat Ali Sajid of Okara in July 2012 and, in July 2017, to Lahore's Azeem Liaquat. After that, the ownership of the vehicle was not transferred to any other identity. However, intelligence sources claim that terrorist Adeel Hafeez bought the car from a person named Saqib Majeed and that there was a deal between Hafeez and Majeed in May 2018. On Jan 22, Punjab Law Minister Raja Basharat announced that the initial report of joint investigation team (JIT) has held officers of the CTD responsible for the killings of three members of the same family. The law minister termed the Sahiwal alleged encounter as ‘100 percent correct’. He also said that the further investigation would be launched about the matter of Zeeshan, who already declared terrorist by the provincial government. Raja Basharat said that the Punjab government has decided to remove several officers of the CTD upon recommendations of the investigation team. The law minister said the CTD Additional IGP and the DIG Sahiwal had immediately been removed from his post, while DIG CTD and the SSP, who led the Sahiwal encounter, were suspended.

On Jan 21, the names of the Counter Terrorism Department (CTD) personnel – involved in an alleged encounter in Sahiwal – have been disclosed. The CTD team was led by Sub-Inspector (SI) Safdar Hussain, whereas Ahsan, Muhammad Ramzan, Saifullah and Hasnain Akbar were also present in the team.

On Jan 20, the first information report (FIR) against 16 unknown Counter Terrorism Department (CTD) officials has been lodged under terrorism and murder sections at the Yousafwala police station. The FIR was lodged under 302 and Section 7 of the Anti-Terrorism Act (ATA) on behalf of Khaleel’s brother Jaleel. In the FIR, ten officials were in uniform and six without uniform. Earlier Jan 19, four people, including two women, were killed by the Counter Terrorism Department (CTD) officials near toll plaza. A child was also injured in the cross-fire, while two remained unhurt. The injured has been shifted to hospital. The local police have expressed their ignorance about the incident. The CTD spokesman claimed that a CTD team tried to stop a car and bike, but the car riders opened fire on them. He said that four people, including two women, were killed. “Three terrorists managed to escape and have been identified as Shahid Jabbar, Abdul Rehman and their accomplice. This was part of the operation in Faisalabad that took place on January 16,” he added. He said that a killed terrorist has been identified, adding that the terrorists were traveling with the family to avoid the arrest. “It is a network of a banned organization who had killed three officers of the ISI in Multan and one in Faisalabad.  Adeel Hafeez was killed in Faisalabad, while Zeeshan was killed in Sahiwal,” he disclosed. Witnesses said that no resistance was shown from the car. They added that the security personnel opened fire on the car and killed four people. They said that the officials took away three children from the site.