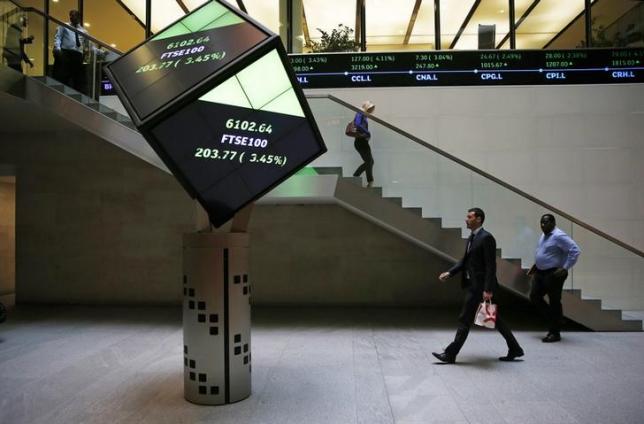 LONDON - A forecast-beating quarterly performance from supermarket chain Sainsbury's (SBRY.L) helped boost UK shares amid a broader market rebound on Wednesday, with Glencore (GLEN.L) also recovering from a painful sell-off. There was also an acceleration in British house price growth in September, according to mortgage lender Nationwide, adding to evidence the housing market has regained momentum. UK and European equities were however on track for their worst quarter since the euro-zone crisis in 2011, with signs of an alarming slowdown in China and the prospect of an interest-rate increase in the U.S. taking the wind out of a multi-year rally fuelled by cheap central bank cash. The FTSE 100 index .FTSE was up 1.7 percent at 0757 GMT, in line with the pan-European FTSEurofirst 300 .FTEU3 index. Sainsbury's was the top performer in the UK, up 12 percent and enjoying its best one-day gain since 2007 after lifting its full-year profit forecast and raising hopes that the battered food-retail sector could be hitting the bottom. Rival Morrisons (MRW.L) was up 6 percent and Tesco (TSCO.L) up 5 percent. "Sainsbury's is doing better than even they expected ... This is good news for the UK average basket size spend," Bernstein analysts wrote in a note to clients. Glencore (GLEN.L) extended its recovery after a torrid 30-percent sell-off on Monday, driven by fears it was not doing enough to cut its debt pile in the face of slumping metals prices. Its shares were up 5.9 percent after the company said it had no solvency issues. Bid talk lifted electrical goods retailer Darty (DRTY.L), up 15 percent after French books and music retailer Fnac (FNAC.PA) said it had made a proposal to buy the company in a deal valuing it at 533 million pounds. Worldwide mergers and acquisitions are close to a record and with interest rates still at rock-bottom, investors expect takeovers to buoy markets going forward despite extra volatility. -Reuters