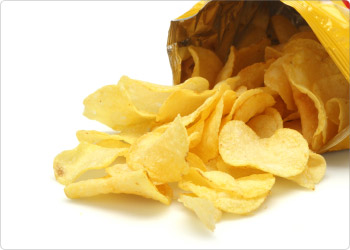 TURIN - Eating a lot of salty snacks is tied to higher blood pressure in Italian middle school students, according to a new study. Eating lots of salt or sodium is a risk factor for high blood pressure, and the salt in the diets of children is increasing worldwide thanks to processed foods, researchers report. “In our study, sodium intake from snacks represented almost half of the average daily consumption of sodium,” said senior author Simona Bo from the University of Torino in Italy. The US recommends children eat less than 2,300 milligrams (mg) of sodium per day, but US children ages six to 18 average about 3,300 mg per day, according to the US Centers for Disease Control and Prevention. African American children and those with some chronic conditions should limit sodium to 1,500 mg per day. “Some of the major sources of sodium in worldwide children's diets are pizza, chips, sandwiches and other salty foods that are often eaten as snacks between meals,” Bo told Reuters Health in an email. “In our study, the sodium intake has been estimated to be about 3.1 grams per day, much higher than recommended,” she said. As reported in the European Journal of Clinical Nutrition, the researchers gave questionnaires to 1,200 kids aged 11 to 13 years in Torino middle schools, asking about their sodium and salty snack intake. Salty snacks were defined as having more than 0.3 grams of sodium per portion and included items such as pizzas, crackers, potato chips, cheese and deli meats. The average sodium intake from snacks for all kids was 1.4 grams per day. And the average blood pressure readings in the new study would be considered around the average range for 12-year-old children, according to the US National Institutes of Health. However, blood pressure increased as the intake of sodium from snacks increased, the researchers found. Eating two or more salty snacks per day was tied to an increased risk of having one of the highest blood pressure readings in the study, compared to eating no more than one salty snack per day. The link remained after researchers accounted for the youths’ heights and weights. “Snacking itself is not harmful,” she said. “If fruits and fresh vegetables are consumed as daily snacks, it would be easier to increase the daily fiber intake and decrease fat, sugar and sodium consumption, in order to reach the recommended nutritional goals.” Meghan Garrity, a registered dietitian with Montefiore Medical Center in New York, cautioned that the new study’s design can’t prove salty snacks caused higher blood pressure readings. Additionally, simply asking children what they eat is challenging because they may overestimate or underestimate the amounts, added Garrity, who was not involved with the new study. “Nonetheless, this study very much demonstrates the role that unhealthy dietary habits are playing on the health and wellbeing of children on a global scale,” she told Reuters Health in an email. Lauren Graf, also a registered dietitian at Montefiore, said it’s important to encourage kids to eat whole, real food such as vegetables, fruit, nuts, nut butters, dark chocolate, and avocado or salsa on whole grain crackers. Graf said in an email to Reuters Health that too much emphasis on a single nutrient may encourage people to choose low sodium versions of processed food like chips that may have less salt but probably won't do much to improve your health. Avoiding excess refined carbohydrates, such as sugary cereals, sweetened beverages and white bread should be encouraged, because “this can increase blood pressure irrespective of the sodium content,” she said. – Reuters