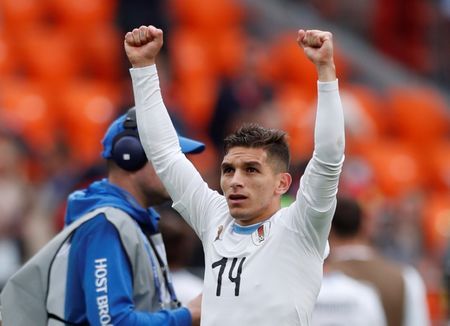 RUSSIA (Reuters) - Lucas Torreira is to leave Sampdoria for a fee of around 30 million euros (26.37 million pounds), the Serie A side’s president Massimo Ferrero has said, as reports continue to link Arsenal with a move for the 22-year-old Uruguayan midfielder.
Torreira joined Sampdoria in 2015 and has made 74 appearances for the Italian club. “Torreira’s gone for 30 million euros,” Ferrero told Italian television channel Sportitalia. “I bought him from Pescara when nobody believed in him. We gambled on him and we won, paying just 3 million euros. The money we’re earning is necessary to increase our club’s capital. “If we get a big offer for somebody, I will accept it, but we don’t need to sell our players off at bargain prices.”