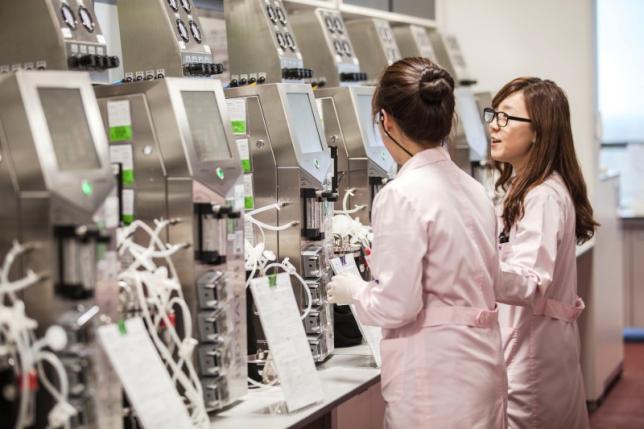 SEOUL - Biosimilars maker Samsung Bioepis, part of South Korea's top family-run conglomerate Samsung Group, said on Monday it is seeking regulatory approval in Europe to sell its copy of AbbVie Inc's rheumatoid arthritis drug Humira. Samsung Bioepis said in a statement the European Medicines Agency has accepted for review its application to sell its biosimilar of Humira, the world's best-selling drug that generated $14 billion in sales last year. The company did not say when it submitted the application for its Humira copy. Interest in biosimilars, a cheaper copy of complex biotech drugs, has soared in recent years as copies of some of the world's best-selling prescription medicines have hit the market. Medical officials and insurers in the United States and Europe hope biosimilars will significantly reduce healthcare costs. Samsung Group hopes its biosimilar company can emerge as a new growth driver as the global smartphone industry matures, clouding long-term earnings prospects for flagship Samsung Electronics Co Ltd. Samsung Bioepis, which seeks to be first or second to market with its products, already received regulatory approval earlier this year to sell its copies of Amgen Inc's Enbrel and Johnson & Johnson's Remicade - two rheumatoid arthritis drugs that are also among the world's best-selling medicines. It was not immediately clear how quickly Samsung Bioepis can bring its Humira biosimilar to market even after regulatory approval from the European Union, as AbbVie's composition patent for Humira will not expire in Europe until October 2018. The US-based company, which earned 61 percent of its 2015 net revenue from Humira, has been filing new patents in a bid to push back sales of biosimilars of the drug. Samsung Bioepis, along with partner and minority shareholder Biogen Inc, filed a lawsuit against AbbVie in Britain on March 24 to stop the US company from blocking the launch of the Humira biosimilar. -Reuters