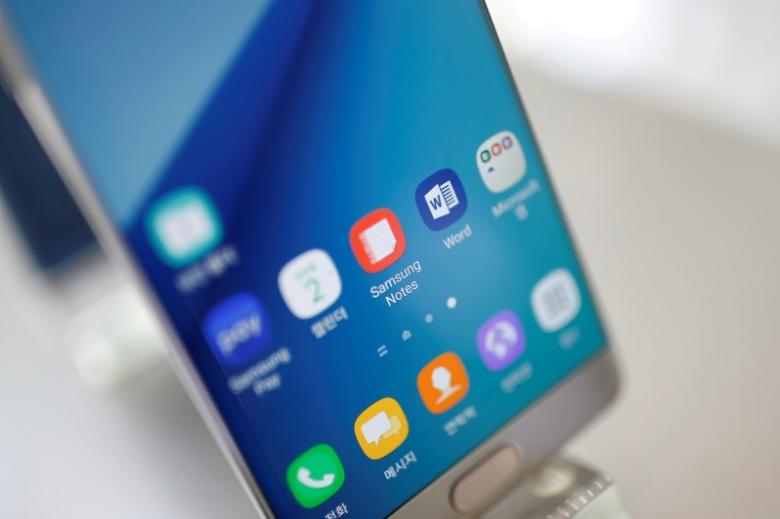 SEOUL - Samsung Electronics Co Ltd's shares fell to their lowest level in nearly two months on Monday after the tech giant told customers to switch off and return their new Galaxy Note 7 smartphones due to fire-prone batteries. Investors had wiped 15.9 trillion won (10.77 billion pounds) off the South Korean firm's market capitalisation as of 0303 GMT, as a series of warnings from regulators and airlines around the world raised fears for the future of the flagship device. "Some said initially the Galaxy Note 7 could be the best smartphone ever, but now it's possible the phone will go down as the worst ever," IBK Securities analyst Lee Seung-woo said, predicting weak sales in the fourth quarter. Samsung Electronics' common shares were down 6.3 percent to 1,476,000 won each after touching their lowest level since July 12, and were on track for their biggest daily percentage drop in more than four years. Analysts said the recall could torpedo Galaxy Note 7 sales and have a lasting impact on the $211 billion company's brand image, which could derail a recovery in its smartphone market share against rivals like Apple Inc. The global smartphone leader on Saturday urged all customers to turn off their Note 7s and return them as soon as possible as part of the recall which it voluntarily initiated on Sept. 2. UNPRECEDENTED The recall is unprecedented for Samsung, which prides itself on its manufacturing prowess. Some analysts estimate the firm might lose $5 billion won worth of revenue after accounting for recall costs. The company had said it had sold 2.5 million Galaxy Note 7s that need to be replaced. Nomura said it had cut its forecast for Samsung's third-quarter mobile operating profit by 900 billion won to 3.1 trillion won in the wake of the Note 7 recall. "Even if Samsung puts Note 7s with new batteries in the market it won't sell as well as it had initially," HMC Investment analyst Greg Roh said. "Long-term, it will cost Samsung significant marketing spending to ensure the next products can overcome this issue." The Note 7 problems are a major blow to Samsung's efforts to build on the strong sales of its Galaxy S7 smartphones launched in March. The firm was beginning to claw back smartphone market share and had tried to pre-empt Apple by launching the almost $900 Note 7 on Aug. 19, about a month ahead of the latest iPhone release. The recall forced Samsung to halt sales indefinitely in markets such as the United States and push back launches in other regions such as Europe. -Reuters