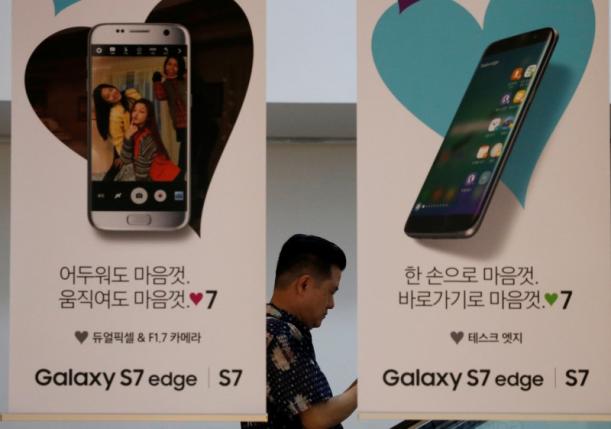 SEOUL - South Korean tech giant Samsung Electronics Co Ltd said on Thursday it expects solid earnings to continue in the second half of 2016, with stronger components demand likely offsetting heightened margin pressures for smartphones. The world's No. 1 maker of smartphones and memory chips said mobile profits would weaken in the second half after soaring 57 percent in April-June, and flagged higher marketing costs to combat new products from rivals. While smartphone earnings looked choppy, Samsung said the components business would buttress second-half earnings amid signs of recovery in memory chip and display panel prices after a global slowdown in gadget sales. "Looking ahead to the second half of 2016, the company expects its solid performance to continue compared to the first half, mainly driven by earnings increase in the component business," Samsung said in a statement. Samsung said April-June profit rose 18 percent from a year earlier to 8.1 trillion won ($7.17 billion), the highest since the first quarter of 2014. The result was in line with the firm's earlier profit guidance. The firm's shares were down 1.3 percent as of 0330 GMT, however, underperforming a 0.4 percent fall for the broader market as foreigners fretted about the strengthening South Korean won KRW=. "The company's performance should remain decent," said IBK Asset Management fund manager Kim Hyun-su, who expects Samsung to maintain quarterly profits between 7 trillion won and 8 trillion won for the rest of 2016. Samsung's mobile division remained the top earner for the second straight quarter, as profit jumped 57 percent from a year earlier to a two-year high of 4.32 trillion won. The company is expected to unveil its new Galaxy Note smartphone next week and will likely start selling its phablet about a month before rival Apple Inc (AAPL.O) launches its new iPhones in September. Apple and other competitors were not likely to launch any ground-breaking products to undercut Samsung in the second half, IBK's Kim said. Even so, Samsung would "need to show something different with the new Note phone" to maintain its mobile momentum, he added. Operating profit for the chips division fell 22 percent to 2.64 trillion won, its lowest since the third quarter of 2014, hurt by broadly weaker chip prices. The supplier of chips for Apple iPhones however said earnings for the business would improve with the roll-out of new gadgets in the months ahead. The firm would buy back and cancel 1.79 trillion won worth of shares in the final instalment of its 11.3 trillion won program, and declared an interim dividend of 1,000 won per common share. -Reuters